#1 Tax (2-1): The chalk improved open lengths off the Gargan claim and with Lasix added when last seen in a sharp third-place run behind prime Derby contender Maximus Mischief (who runs later in Gulfstream Park’s GII Holy Bull, see the preview here as well) over the track and distance in the GII Remsen in November, though there will be many wanting to see him back that effort up before they become believers. The good news is this son of Arch drew best of all and has a tactical gear that will allow him to save all the ground into the quick run to the first turn, and after just three starts, including that huge initial try for his new barn, there’s still a ton of upside here, too. The worry, though; is the short price and a much faster pace that he figures to face today, so while he’s a major player, there are hurdles here, too; plenty scary, but no lock.

#2 Sir Winston (12-1): The first of two for Casse was doing the Tapeta thing up at Woodbine last year and will need to improve several lengths off his win in the Display in December to make a dent against a group like this. As least he’s bred for it though, as dad Awesome Again is one of the top long-distance dirt sires around, and this colt is 2-for-3 at two turns as well, though his lone dirt start in his debut at Churchill Downs was brutal, and that turf run at Saratoga next-out was just as bad, which further extends the thought that he’s a synthetic specialist; tough to tout.

#3 Moretti (3-1): Track and distance MSW winner steps up for Pletcher off a dominant, albeit relatively slow, win in his second start, though it’s never easy winning your two-turn debut, so obviously there’s some talent here. Pricey son of Medaglia d’Oro adds blinkers off that win, which is a bit odd, but in Todd we trust, although the hood figures to have him on or just off a pace that appears very honest for a short field going two turns. The upside here is more than the rest here can say, and just maybe he bridges the gap to graded stakes foes and stamps himself as a serious horse, but at this price you have to make these types prove it; limiting his use to underneath only.

#4 Admire (15-1): Romans charge is a lot like the 3, in that he went one-turn in his debut and used that as a springboard to a 1 1/8-miles MSW win in his second start, though that CD score in November was in very slow time and won’t scare anyone here off. Cairo Prince colt is another with some upside after just two starts, and the Albaughs seem to trot out good 3-year-olds every year, but this seems like a reach, at least at this point in his development; remembering his name for down the road.

#5 Lucky Lee (7-2): Streaking runner for John Servis has aired in two straight at Parx since being stretched out to two turns and figures to try to wire these too, as speed is his main asset. Son of Flatter really stepped up his game when he won the N1X last time, as it was in very fast time on the lead, though he did show in his MSW win two-back that he can sit just off the early proceedings, if necessary. The acid test comes today, but that’s the same for everyone but the 1, and unlike that runner, the price will be right for those who believe; figures to make his presence felt. 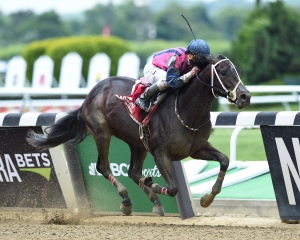 #6 Our Braintrust (6-1): Casse’s second was a private purchase by Barber after he was a good second for former trainer Lynch to GI winner Mind Control in the local Jerome last month, and those keeping score at home know big improvement often comes when the pink silks go on for a very sharp owner-trainer combo. Tactical son of Freud will need to prove he can get this trip and two turns, and it does stretch his pedigree a bit thin, but there are no world beaters here, either, which might help him in that potentially dicey final furlong. The other thing he has going for him is on the toteboard, as he should be a square price, even though that last run shows that he belongs and he could move way up for his new connections; call in a real scramble.

#7 Not That Brady (4-1): Talented NYB has run off and hid while winning in fast time in two straight since stretching out and will now try to carry his speed two turns for the first time as Rodriguez sends him to open company to see just what’s under the hood. Big Brown gelding is bred to handle this trip but will have to gun from a very poor draw, as that run to the first turn is a quick one, which further clouds his chances. Plus, most of the others to his inside want to be up close, too, so it’s unlikely they let him clear off, unless he’s used hard on a dead-send mission, which won’t help his chances in the lane, either; thinking he gets stopped near the goal line against this group.