Because today’s big races are so widely covered elsewhere—The Blood-Horse, The Daily Racing Form, Steven Crist’s blog, Left At The Gate–and because it’s impossible to talk about the races without also talking about the injuries, which I don’t particularly feel like doing (not because I don’t care, but because I do), I’m going to talk about some non-big names, non-stakes horses.

A reader of this blog in its former incarnation (as a series of postings on the discussion board at Alex Brown Racing) asked about the performance of Lord Langfuhr in the first at Belmont last Wednesday. This is the time of year when professional/personal interests collide (the Rangers’ season begins; lots of evening events at school; loads of good horse racing), so today I finally had a chance to take a look at it.

I’m glad she asked, because it was one of those last to…OK, not first, but second, finishes. As the field headed down the backstretch, with five and a half furlongs to go, Lord Langfuhr was five lengths behind the last horse, at least ten—fifteen?–lengths from the front. Around the turn, Durkin, who had essentially left the horse out of the call, noted that he was “launching a bid,” but the focus was on Indian Hawke, who, as the field headed into the stretch, was pulling away decisively, and Lord Langfuhr was still nine lengths behind. He had saved ground on the rail throughout the race and despite being what looked to be about four lengths behind the second-place horse, he turned it on and nipped Stonewood at the wire to get second by a nose. The winner won by 12+ lengths, so the camera really focused on him, but Lord Langfuhr came flying to get up. So: congrats to him and his connections, and thanks for asking about it—you gave me an opportunity to watch him.

And in other news from the same connections, the Duchess of Rokeby (loyal readers will know she’s a favorite of mine) is entered at Belmont on Monday’s Columbus Day card.

Down at Delaware Park today, old favorite Spooky Mulder took an ungraded stakes in a field of four. I’m a bit sad that he’s racing at Delaware instead of up here, but the guy loves Aqueduct, so I’m hoping that if he keeps racing we’ll see him up here this winter. He’s NINE!

Sunday at Belmont features the Grade II Jerome, the second-oldest stakes races in the country behind the Travers. It’s named for Leonard Jerome, who is one of the major figures in the history of Thoroughbred racing in this country and the eponymous founder of the Jerome racetrack in the Bronx; in NY racing, Jerome is up there with Morrissey and Travers. The race is for three-year-olds and run at a mile on the dirt; Discreet Cat won it last year, and other winners are Silver Train, Fusaichi Pegasus, and, going further back, Crème Fraiche, Kelso, and Afleet. The race was first run in 1866, and early winners are some of the rock stars of 19th century racing, such as Harry Bassett (1871) and Aristides (1875).

Much as I liked Majestic Warrior on closing day at Saratoga, I can’t be sorry, Nick Zito fan that I am, that his horse won the Champagne today. It seems like it’s a long time since he’s won a big race—all those seconds!—so it was nice to see him in the winner’s circle for a Grade I. Kenny Mayne noted in his interview with Zito that today is the trainer’s fifth win in the Champagne.

And here’s hoping that equine science can meet Teuflesberg’s needs. He’s a warrior horse with guts and heart, and at least one owner who adores him. Jamie Sanders was offered six figures to sell him (earlier this year? late last year?), and she declined, reportedly saying, “A horse like this comes along once in a lifetime.” I watched him nearly win the Sanford at Saratoga last year, defeated by a late- and greenly-running Scat Daddy, and his charisma was apparent then. Let’s hope that his guts and heart, combined with advances in veterinary medicine, can save his life. Here he is on a gorgeous Saratoga morning, with his trainer/part owner Jamie Sanders on his back. 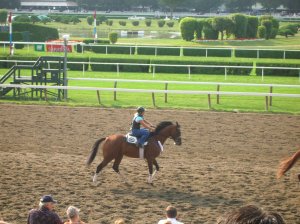