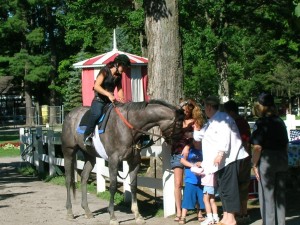 On Sunday, August 5th, I wrote the following in my Saratoga blog at Tim Woolley or Alex Brown Racing (I can’t remember which it was at this point):

There was a wonderful “only at Saratoga” moment as I walked to the car; a horse was coming out of the paddock on its way back to its barn, and its exercise rider paused by a small group of people along the rail; she let them and their children pet her mount, a three-year-old, for a good five minutes. She talked at length about the horse (whose name I have forgotten! I may remember enough to find it out later today) as he pawed the ground and relaxed his head onto the shoulders of the onlookers. He utterly charmed the whole group before heading off back to his barn.

I did remember enough of his name to find it through a DRF search, and I entered him in my watch list: Triple Nine Fine.

He raced at Presque Isle, at least once, maybe twice, and maybe somewhere else after that; he didn’t seem to distinguish himself, and I didn’t pay a lot of attention, thinking that the ending to his story might not bring the literary or racing satisfaction for which one could hope.

I knew the horse was entered at Hawthorne, but again, didn’t pay attention, and when I got home from dinner last night, I rather routinely checked my e-mail, clicking on the DRF race result notification…and HE HAD WON! Won! By, as the chart noted, seven lengths, paying $5.40.

So there it is: the happy ending, in both literary and racing terms.

Earlier today, browsing blogs, I saw that Joe Clancy also wrote about this horse, and his son’s experience with Triple Nine Fine last summer at Saratoga. Amazing, isn’t it, how this fairly unremarkable (relatively speaking) little racehorse captured our attention and imagination—and now, he’s famous (also relatively speaking)! You can watch the race here; it’s a little grainy, and you’ll have to register (it’s free), but it was awfully fun to see him take over decisively. It’s the second race on November 30th, at Hawthorne.

The writers of the Thoroughbred Bloggers’ Alliance are trying to get a sense of who our readers are–so we’ve got a little survey up at the homepage. It will take you less than a minute to complete, and we’d really appreciate your feedback. Thanks!