My Saturday mornings are often a leisurely stroll through racing history; with a cup of coffee (aside: for Christmas, my mother gave me one of those old-time stovetop espresso pots, and it makes the best coffee I’ve ever drunk. It’s a sublime source of Saturday morning pleasure), I check out the New York feature race, which leads me through archives and databases, into racing landscapes long disappeared. I am happy to say that this morning is no different, and even happier that my path led me so close to my hometown, to which I will travel on Sunday.

Today’s feature at Aqueduct is the Hollie Hughes, and the ever-reliable NYRA website tells us that this race for New York breds, first run in 1979, is named for the man who trained horses in New York for over seventy years. Mr. Hughes trained horses for the Sanford family beginning in 1914 and won his first race, fittingly, at Saratoga that year. Two years later, Hughes won the Derby with George Smith, but unfortunately, wasn’t present because he was in the army. I searched in vain for more information on Hughes’ first winner and his Derby win, but came up empty, despite using a variety of databases.

Hughes was inducted into the Racing Hall of Fame in 1973 and died in 1981. This wonderful New York Times article from 1978, written by Red Smith, illustrates the relationship between Hughes and the Sanford family. (Registration and possibly payment required to read—those who subscribe to the New York Times can read it for free.)

And speaking of the Sanfords: Yes, this is the family for whom the celebrated Sanford is named; run annually at Saratoga early in the meet, it’s a premier race for two-year-olds and honors a founding family of Thoroughbred racing, whose farm is located in nearby Amsterdam, New York.

Sanford horses began racing in Saratoga in 1880, and legend has it that horses were walked the nearly thirty miles from Amsterdam to the Spa. The Sanford’s Hurricana Farm also had its own track, which attracted crowds of the fashionable. 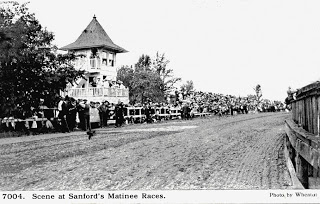 Predictably, the Sanford farm has been sold off and torn down over the years, despite the best efforts of local and racing people determined to save this important part of racing history. The Friends of Sanford Stud note that the beautiful training track is now a shopping mall and actively seek donations to help ward off the eventual disappearance of this historic site.

And back we go to Hollie Hughes, trainer of the Sanford horses for more than half a century. Former winners of his eponymous race include not just horse for the course, but horse for the race Papua, who won it three years in a row, and Notebook in 1989; last year, it was won by seven-year-old Introspect. With today’s scratches of Premium Wine and Stormin Normandy, Whistlin’ is the 4/1 morning line favorite.

As interested as I am in the history of this race, for pure racing action, I confess that my eyes will be turned southward, where local favorite Naughty New Yorker ventures outside the Empire State for the first time in his long career (40 starts) to run in the John B. Campbell Handicap at Laurel. Angliana, who beat Evening Attire in the Aqueduct Handicap last month, joins him; Nite Lite is favored, and Mike Luzzi ships southward to ride.

Wheaton. “7004. Scene at Sanford’s Matinee Races.” On the Rail at Sanford’s. 16 Feb 2007. http://www.lostlandmarks.org/sanfordracing.html

8 thoughts on “Hollie Hughes and history”