I can’t imagine that my visit to Three Chimneys was all that different from anyone else’s; as with most elements of the breeding industry, the place is a smooth-running machine, with the touring part of the business in the very capable hands of Ann Hayes, our wonderful tour guide.

We got a little lucky: the weather in Kentucky was largely awful while I was there, but this day, though chilly, was gorgeously sunny, and the farm looked beautiful: those green paddocks outlined by white fences, spotted with stallions and mares, contentedly munching grass. It looked as it does in all of those photos of bluegrass Kentucky you’ve ever seen.

I made a number of phone calls to farms when I began planning this trip last fall, and of the dozen or so that I called, Three Chimneys was the only one with regularly scheduled tours during breeding season to non-industry folk like me. Several farms never responded; others declined when I told them I was “just a fan” and not a breeder. So Three Chimneys it was.

We were greeted by Miles the tomcat when we arrived, and shortly thereafter by Ann, who informed us of the “rules” (no touching the stallions, stay together, photos are fine, no flash during breeding). There were about a dozen of us in the group.

We began in the stallion barn that houses Point Given, Rahy, Yes It’s True, Sky Mesa, and Smarty Jones. I know that Smarty Jones is the star of the show (and if we didn’t know that, his being in Seattle Slew’s old stall gives him pride of place), but, while respecting his accomplishments, I was never a huge fan of his and was much more interested in seeing Rahy and Sky Mesa. That’s Rahy to the left, and he became much more, ahem, prominent later in our visit.

Ann mentioned the accomplishments of the more prominent stallions: Smarty’s road to the Triple Crown; Point Given’s Haskell and Belmont. The tour is clearly designed for the more casual fan, who has probably never heard of Rahy or Yes It’s True, and Smarty Jones was dutifully presented (left) to our group as Ann recounted his racing career. He knows the drill: led out of the stall, he stands quietly in the circle, turns his head a few times, goes back inside. 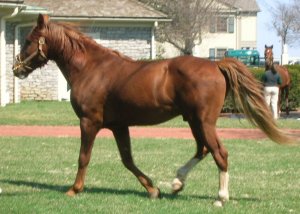 After that, it was all about the breeding. Having read Glenye Cain’s The Home Run Horse, I had a good idea of what to expect, and Ann’s narrative pretty much mirrored what Cain wrote. We stood in the stall where the mare checks in, gets her paperwork approved, and gets cleaned up and “teased” (that’s Cheyenne the teaser pony to the right, off to do his job) before meeting the stallion. We went to the breeding shed, with its 14 inches of shredded tires on the floor, padded walls, and height-specific platforms where the cover takes place. Ann related the various ways in which the stallion is protected from the mare: padded boots go over her back hooves; her lip is twitched so the handler can manage her head; one of her front legs is raised as she is mounted so that it’s harder for her to kick. Over and over we heard: we can’t let anything happen that might damage the stallion. I get it, really, I do, but it was a little offensive to keep hearing about the precious stallion while the poor mare is physically and uncomfortably restricted.

Walking back outside, we gathered by the statue of Seattle Slew, who stood at Three Chimneys, and visited the Three Chimneys graveyard, where lies, among others, Fly So Free. We also visited the second stallion barn, which houses Exchange Rate and the notoriously rotten Dynaformer.

And then we got to watch the main event.

Given the reluctance of most farms to even let visitors on the grounds during breeding season, I was more than a little surprised when Ann led us back to the breeding shed to watch Rahy cover a mare. Rahy’s on the smallish side (I’m talking about his height!), so the mare was placed on a part of the shed that was a little lower than the floor, making it easier for Rahy to mount her. Ann warned us that we might not get to see the act consummated, as Rahy tends to “warm up slowly,” and indeed, he took a little coaxing. He apparently responds quite favorably to having his belly rubbed, and after about ten minutes of watching the mare exhibit “receptive behavior,” he was, um, ready for action. It was actually a lot less violent than I’d thought, and the mare throughout, even as she was waiting for him, was incredibly calm, even, dare I say, professional? As Rahy took his time getting ready, she looked over her shoulder a few times as if to say, “Anytime you’re ready, big guy.” Or maybe she was saying, “It’s okay; it happens to everyone once in a while.”

The entire cover took less than a minute, far less than the preamble, and it’s awfully hard to resist making predictable jokes, but I’m going to take the high road on this one. Ann related that each of the stallions has his own particular mating style, and that the famed Dynaformer, who is aggressive in everything else he does, has a hard time performing when there’s a crowd, so tours aren’t permitted to watch him. She also told stories of another stallion who seemed to like an audience, so other mares were brought to the doorway of the shed whenever he was scheduled to breed. And then there’s the stallion who had a thing for grey mares, so a grey blanket was procured to throw over the back of any darker mares he was scheduled to cover. Kind of like that blonde wig I used to own…oops, back to the high road.

A Lexington friend encouraged me to tip the tour guide, and if possible, to do so in full view of the other guests so that they would do the same. I took that advice, but no one else took the bait, but I pass the advice on to you, as I’m not sure that it would have occurred to me. Ann Hayes is great at her job: she knows a lot, she’s friendly, she’s business-like, she’s patient. I’d love to just sit down and talk to her about life on the farm, the breeding business, the characters in her care.

As I said, I can understand the reasoning behind closing the farms to visitors during breeding season. But if Three Chimneys can do it (and free of charge), I can’t see any reason why other farms can’t do it without disrupting their business. Maybe they don’t want to open the breeding shed, but I can’t say that any of us would have been disappointed if we hadn’t been able to witness a cover; the tour would have been great without it. Given the difficulty of attracting fans to the game, it seems silly to turn away people who want to come visit and get to know a little bit more about the business. I’d hope that some of the other farms in the area would re-consider, and open their doors to the many people interested in racing and interested in specific horses.

Three Chimneys is a massive operation, as are most of the farms, and the pregnant mares, the dams, and the foals are on different farms from the stallions. I’d loved to have seen some of my favorite race mares with their offspring, and I wish that we’d have been able to do that. We drove past many fields with gamboling foals, and I could have watched them for hours. We all know that the stallions are the industry superstars, and it was great to see them, but I’d love to see the mares get some of the same attention, and for fans to see them up close when their racing days are over.