I was already feeling guilty about not supporting one of my home tracks on its closing weekend; now that the Withers has become something of an end-of-season embarrassment, I am even more chagrined about my defection to points south instead of being at Aqueduct today.

This storied race, first run in 1874, drew a field of four—four!—colts. As a result, it’s been placed as the third race instead of the customary ninth, so as not to interfere with the Pick 6. It’s been replaced with the Grade III Beaugay Handicap.

The Withers is named for David Dunham Withers, a New Yorker who made his fortune in the South and who became a member of the American Jockey Club and a founding father of Jerome Park. Withers won his eponymous race in 1890 with his own horse, King Eric, on quite a remarkable day at the course in the Bronx, when, according to the New York Times, “Morris Park [was] packed to capacity for the first time”:

…on no race course in America was there ever before such a multitude as that which swarmed to the great Westchester track…train after train from the Harlem Station of the New-Haven and Hartford Road emptied crowded cargoes, only to
return for more; the main drive from the city was an unbroken succession of vehicles of all kinds; hundreds of spectators came down the railroad from the east, and all the country districts gave up their population to swell the mighty aggregation. (New York Times)

“The mighty aggregation!” Would that those of us attending the races this weekend could aspire to such a description. 1890 was Morris Park’s inaugural season, and the track was open for only fourteen years. Described as “opulent,” it apparently wasn’t quite ready for the crowds who arrived on May 30th, 1890:

It has been estimated that 30,000 people have congregated in the past to see the great Suburban Handicap race run at Sheepshead Bay. If that estimate is true, there were more than forty thousand people at Morris Park yesterday. 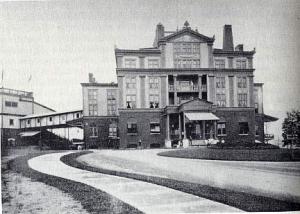 The new clubhouse is still bare and forbidding in its unfinished condition, but on its lawn were numerous settees and chairs reserved for club members. The betting ring, which has hitherto been thought to be unnecessarily large, was yesterday many times too small to accommodate the public in its mad rush
to invest its money… (New York Times)

OK, even 118 years later, that sounds familiar! This photo, taken from John McNamara’s McNamara’s Old Bronx, was found on Forgotten NY, an excellent place to get lost for a few hours.

Further evidence of growing pains, and of the similarities between the race fans of yesteryear and today, comes in this reaction to the movement of the finish line:

Heretofore [the finish line] has been opposite the middle of the grand stand, and where all of the spectators could have a fair view of the end of the races. Yesterday it was located at the extreme end of the grand stand, a position that made it impossible for nineteen-twentieths of the people present to determine the winner in a close finish. The press suffered
particularly by this change, as the reporters were compelled to await the decision of the judges before they could go on with their work. Even then it was more or less guess work as to the order of the whole field and as to the distances between he placed horses. But the crowd as a whole denounced the
change as bad, and the opinion was unanimous that the new location of the finish would militate against the popularity of the race course. The sooner the management of the track places the finish back in its old position the better will it be for all concerned. (New York Times)

But why oh why doesn’t the reporter tell us why the finish line was changed?

Fortunately, our dutiful reporter (who goes unnamed) doesn’t forget to review what was then and now the driving force behind the races:

…the experienced racegoer expects that there will be a vast amount of discomfort in betting…the whole proceeding engendered the deepest disgust and provoked the severest criticism…it behooves the management of this great
institution to look to these two causes of common complaint. Morris Park has all the elements of success and it is now on a swelling wave of popularity, but it is not yet old enough or strong enough to utterly ignore the demands of the public or to disregard the comfort and convenience of its patrons.

What an interesting statement…this new kid on the block had better try hard to please its customers, but those more venerable places that have been around longer…well, they’ve earned the right to do just what they please, the patron be damned. Unfortunately, there are far too many race fans who would feel that this estimation is right, ahem, on the money.

While the article duly notes the well-heeled folks who purchased the sold-out boxes for the meet, we press on towards the featured Withers, the third race on the day—just as it is today, its 131st renewal.

[Mr.] Withers was seen to smile after the third race was run…[he] won it for the first time since it was inaugurated by the American Jockey Club. His candidate in the race was the King Ernest – Cyclone colt…[and] the victory was so extremely satisfactory to Mr. Withers that he at once christened him King
Eric…In the run down the long stretch to the finish Tournament had to give up the contest and rapidly fell to the rear. [Jockey] Garrison then got the Cyclone colt to the front and kept him there to the end, beating Magnate home by a length…It was a close race, and was cleverly won in 1:41, very fast time for
the track, as it includes a run over the hill by the water tower.

“A run over the hill by the water tower!” Oh, I would have liked to see that…I unfortunately couldn’t find any photos of the track itself, but this imposing grandstand conveys the grandeur of the place, and the high hopes of its founders. Isn’t it nice to remember a time when such edifices were constructed by people who know that they’d be filled come race day?

I was a little surprised to realize that the Withers is one of the official Derby preps in the Road to the Roses fantasy game; while it boasts some distinguished winners—Scrappy T in 2005 and Medallist in 2004; going back further, Williamstown in 1993, Dr. Fager in 1967–it’s been a while since this race has been a factor on the trail to the first Saturday in May; in fact, Count Fleet was the last Withers winner to win the Derby, in 1943.

As a racing fan, I of course look forward to the Derby, but as the road to Louisville seldom passes through Ozone Park, I am often more focused on local horses than I am on those racing far afield. I don’t really mind that the Withers isn’t a Derby prep, but I do mind that so few trainers are interested in this race for their colts. Our chances are smaller this year that one of these colts will go on to spring or summer greatness…but maybe that’s what they were thinking back in 2006, when a little-known colt named Bernardini won it.

Several people have commented on my compulsion to cite sources as if this were some literary or academic endeavor. There are two reasons: the first is that as a teacher, I can’t resist. I’d never let my students write something like this without acknowledging their sources, and I gotta practice what I preach.

The second reason is that even though these old Times articles are linked within the post, most people can’t access them because they require a subscription, so the details of the original article aren’t available.

One thought on “Whither the Withers?”