My parents owned harness horses when I was a kid, and when I was a teenager, my family moved to Saratoga. Until I was about 23, I was around racing pretty regularly and even though I didn’t follow the sport that closely, I went to the track a few times a year and considered myself a fan.

Then came a period of about twelve years when I paid zero attention to racing. I moved away from upstate, I developed other interests, I fretted about the humaneness of racing. As a result, for the five years that I lived in northern Baltimore County, I never even saw the Preakness on TV, and I never went to Pimlico. Now that I travel hundreds of miles just to make a day trip to a track, it’s inconceivable to me that I didn’t travel the twenty miles to visit what could have, and should have, been my home track.

Fortunately, I remedied this egregious oversight last Saturday, when I spent a great day at Old Hilltop, just off Northern Parkway in Baltimore. The weather was glorious—warm and sunny—and I was nearly giddy at the prospect of spending a day outside at the races.

Unfortunately, I alone in the greater Baltimore area seemed to have had that thought, as the place was almost literally empty when I arrived after the second race. As I mused aloud to a friend about where everyone might be, a bystander informed us that everyone was home watching the NFL draft. Oh. Well, at least we didn’t have any trouble getting a seat.

As at Laurel, its sister track, the physical plant is spacious and clean, and feels modern. Though the grandstand was deserted, there was more of a buzz in the clubhouse, on the top floor of which is the Sports Palace. Exploring, I peeked my head inside this rather mysteriously dark room, lit by a chandelier. It’s apparently a simulcasting/dining facility, but it looked a little like a super-double-secret club into which could enter only those who knew the password. I retreated back downstairs.

The apron is incredibly close to the track, sloping downwards so that the level of the track is about knee-level. My camera’s not great and it doesn’t have a powerful zoom, so you can see from this how close spectators are to the horses on the track. Seven of the ten races started in front of us, offering a terrific view of the horses at both the start and the finish.

The paddock is a wasted opportunity. Because it’s inside, I couldn’t take any photos (because I can’t figure out how to turn off the flash on the camera), but it’s nicely designed, if small, with an eye towards aesthetics. But why is it inside? Even Aqueduct and Turfway, which get worse weather than Baltimore generally does, saddle their horses in the open air, and this would be a terrific paddock if it offered better sight lines and were outside.

I was strongly encouraged to check out the museum on the second floor of the clubhouse…what a treat. Multiple newspapers in which geopolitical news of a world war competes with racing headlines; a circa 1875 bar from the original Pimlico grandstand; a monthly training bill from 1904 for eight horses and the blacksmith, totaling $176; memorabilia commemorating the Seabiscuit/War Admiral race. It’s not very big, but it’s packed with items that could have kept me absorbed for much longer than I spent there. Racing history geek tht I am, I wanted to read every word about every item, and rush out to buy a book on the history of the track.

Pimlico being a Laurel track, it is not without its Frank references, especially those touting specialty drinks made with Frank’s Energy Drink. Nope, we didn’t try one this time, either. 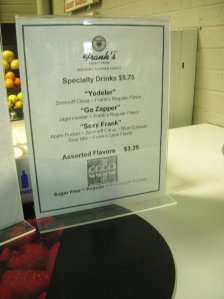 The infield looks far too beautiful to be sullied by tens of thousands of drunken college kids, but big signs touted infield tickets for sale for $60, which frankly seems high to me. $60 to be jammed with a mass of unpleasant humanity and nary a view of the races? No, thank you. 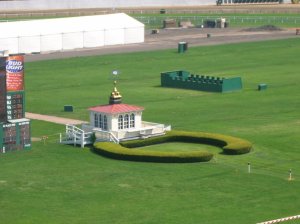 The fields were a good size, with decent betting opportunities and prices, and most of the races were contested to the wire. The featured Henry S. Clark Stakes was a competitive race with a few familiar names: Westmoreland, just up from Gulfstream; Ramazutti, who’s been all over the country in the last year; Forty Crowns, who won the Maryland Millions Turf last October; and Stay Close, who won the race last year. It was a decent betting race ultimately won by the favorite, Stay Close, a neck in front of 15 – 1 Forty Crowns.

The crowd grew a little as the day went on, though I can’t find any published attendance figures. I didn’t bet much and what I did bet I lost, making it my second consecutive day at the races without cashing a ticket, but similarly to the day at the Atlantic City course, hanging out at the rail on a gorgeous day with good friends is a nearly sublime experience, and after the races, we went to the backside to visit a friend’s horse entered the next day.

I’m not sure I’d want to be at Pimlico for the Preakness (unless I had a really good seat that someone else paid for), but I’d love to go back on a day with a few stakes and a bigger buzz. I love the history of Old Hilltop, and I feel like I’ve got a few years of neglecting it that I’ve got to make up for.

7 thoughts on “Playing at Pimlico”