Today’s feature race at Belmont is the Grade II Sheepshead Bay Handicap, run on the turf at a mile and three-eighths for fillies and mares, three and up. A neighborhood in Brooklyn, Sheepshead Bay was home to a racetrack from 1884 – 1910. In 1911, horse racing was declared illegal in New York State, and the track closed, never to reopen. During its relatively short existence, though, it was no small player in New York racing history.

The Sheepshead Bay track was founded by the usual suspects in New York racing: Jerome, Travers, Belmont et al. The Coney Island Jockey Club was formed in 1880, and races were held seasonally at Prospect Park until the new track was complete in 1894. Born at Sheepshead Bay were both the Suburban (a funny name for a track in Brooklyn, it comes from the English race the City and Suburban) and the Futurity.

In his comprehensive history of racing in New York, They’re Off! Horse Racing at Saratoga, Edward Hotaling writes, “…on June 25, 1890, Sheepshead Bay staged the most electrifying contest of [the Gay Nineties]. J.B. Haggin’s Salvator, one of the giants of the age, met millionaire D.T. Pulsifer’s Tenny, who somehow had conquered him four times in six meetings.” [Note: Salvator’s page on the National Museum of Racing website notes that it was Salvator who beat Tenny four times.]

Salvator and Tenny were the Alydar and Affirmed, the Sunday Silence and Easy Goer, of the late 1890’s. Following Tenny’s defeat to Salvator in the June 17th Suburban at Sheepshead Bay, Tenny’s owners proposed a match race a week later on the same course. The day after the race, the New York Times called the race “probably the greatest in the history of thoroughbred racing.”

The June 26th, 1890 article from which that quotation comes is notable for the racing history it contains, but also for its voice, its details. The unnamed author conveys his knowledge of and affection for racing; the piece is as much a feature as it is a piece of reporting:

The Coney Island Jockey Club covered itself with glory when it brought about the
match between the two best horses in this country. At least 15,000 people,
probably more, were at the beautiful track to see the contest. The track was
‘lightning fast,’ as trainers call a particularly good track…The enthusiasm
shown during the running of the race was unequaled at any racing event
during the past decade. Men and women alike seemed crazy, and hugged one
another, shouted themselves hoarse, threw hats, umbrellas, parasols, and
handkerchiefs into the air and altogether acted as if they had lost
possession of their senses.

In the crowd was a quiet, gray-whiskered man, who made little noise, but who did a heap of ‘rooting’ for Salvator. It was James E. Kelly, the veteran of the betting ring, who stood to win $10,000 in case of Salvator’s victory. He watched every motion of the handsome chestnut son of Prince Charlie, and when the race was ended he put $10,000 in his inside pocket, and was thoroughly glad that such things as match races exist. (New York Times)

Our reporter notes that Tenny had a “sulking disposition,” and that this behavior likely caused his defeat, as it permitted Salvator to get a lead around the first turn. On the backstretch, Salvator was four lengths in front on his way to a track record, but Tenny challenged him in the stretch:

…when the head of the home stretch was reached [jockey Snapper Garrison] had
Tenny within three lengths of the flying Salvator. Then came a battle royal
for a quarter of a mile, the vast crowd going almost crazy while it was
being fought out. Garrison rode Tenny like a very demon, but [jockey Isaac]
Murphy and Salvator would not be caught….Salvator managed to get first past
the judges, beating Tenny by a head only, and an infinitesimal part of a
second in that remarkable time—2:05. (New York Times)

Hotaling quotes from the newspaper Spirit of the Times: “The way Tenny came up with his flying rival in the last 100 yards was a miracle, perfectly stupendous.” And he notes that the race inspired a poem by Ella Wheeler Wilcox: “We are under the string now—the great race is done—/And Salvator, Salvator, Salvator won!”

I found these images of the track at Arrt’s Arrchives: 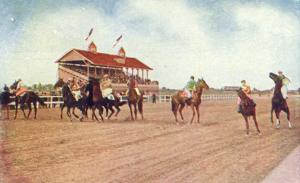 And this one of the finish line at the website of the National Museum of Racing in Saratoga:

On the website Sheepshead Bay History, author Ira Leitner imagines wandering around Brooklyn, in the very paths on which horses ran during the early part of the last century. Though gone for good in 1910, Sheepshead Bay Racetrack lives on both in the various websites devoted to Brooklyn and racing history, and in the name of its eponymous Handicap, renewed today for the 55th time. On his blog Paul Moran calls today’s race “uninspired and paceless,” and I will leave the race analysis and handicapping to him. I’m going to focus, instead, on what the Sheepshead Bay evokes, and what it recalls. And who knows? Maybe late this afternoon two fillies will charge to the wire, noses apart, and bring the apron crowd to life as Tenny and Salvator did, not far away in Sheepshead Bay, nearly 120 years ago.

And while we’re celebrating and being inspired by Brooklyn history, a very happy 125th birthday to the Brooklyn Bridge, whose birthday fireworks I watched from my roof a couple of nights ago. It is the totem of this blog, and I am lucky enough to enjoy its magnificence daily: 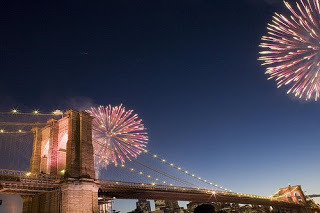