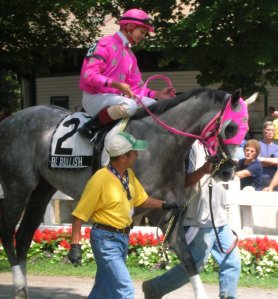 “Is Mr. Schwartz around?” I ask a stablehand, having no idea what the trainer looks like.

He looks at me skeptically. “Not here right now,” he says. “Be back in a few minutes. In a pink cart.”

A pink cart? OK. That should make it easy.

I get a cup of coffee, and when I come back, the pink golf cart is parked in front of the barn. I introduce myself to Scott Schwartz, trainer of last week’s upset winner Scooty the Pro and of Be Bullish, a New York-bred colt that I’ve been following since last September. Kent Desormeaux was riding him that day, coming off a hot Saratoga meet in which he finished second by one to Cornelio Velasquez for the riding title. Be Bullish won on September 22nd, his first time out; the inquiry sign was posted and the review seemed interminable, but the result was ultimately let stand, though Desormeaux was suspended for his careless riding in the race, as Be Bullish crashed his way to victory.

Schwartz tells me that Be Bullish was supposed to make his first start last summer, but acted so badly in the detention barn he hurt himself and set himself back. “He’s great in the stall,” Schwartz says. “But when you put a saddle on him, he goes crazy.”

The colt raced regularly through the winter, though his schedule was about all that was consistent; his unpredictability on the track meant that you could, at times, get him at long odds. He raced mostly in allowances, and after notching his second win in January, tried state-bred stakes again, winning the Appealing Guy at Aqueduct in February. The day before, I noted that I wanted to skip school to go out and see him race, and it turned out that it would have been a personal day well spent: Be Bullish’s race needs to be seen to be believed and is available at Cal Racing. Alan at Left at the Gate described it this way at the time:

You’d think it was the first rather than his sixth start for Be Bullish, as greenly as he raced. After being bumped and steadied at the start, he suddenly shied towards the rail – you have to watch the head on to see. It’s a wonder that jockey Chuck Lopez stayed aboard. Then, from dead last, he bore out turning for home and went about a million wide, and not only rallied to win, but did so going away.

Watching the run down the backstretch, you can’t believe that the horse is going to finish the race, much less end up winning, practically running up the apron to do so. “So he lives up to his name?” I ask, and Schwartz nods, chuckling. “Yeah, I guess he does.”

Schwartz notes that Be Bullish does exactly what he wants on the racetrack: he’s perfectly intractable, and it shows in his past performances. Through the spring, you never knew which Be Bullish would show up; running in stakes, state-bred stakes, and a claiming race, he had two sixths, a fourth, and two seconds, and his running lines indicated that he was still a bit of a wild man on the track: “6wide;outrun”; “Knocked sideways brk”; “5w turn; rallied.” Sometimes he stalks, sometimes he closes, sometimes he goes to the front. A three-year-old with twelve starts under his belt, he’s still figuring it out.

Last Thursday he finally made his first start at Saratoga, in a state-bred ungraded stakes race. There were two clear favorites in the field of five; on paper, he was completely out-classed. Nobody, it seems, told Be Bullish that, though, and for a few moments in the stretch drive, he had a clear path to victory; on the rail, a hole opened, and this colt who bulled his way to victory to last September started to go through it …hesitated …dropped back…and surged forward, but too late, finishing third, just a neck and a head behind the winner.

Be Bullish bears out what Schwartz says about his personality as we stand outside his stall; the treats come steadily, a bite of carrot, a peppermint, and he’s affectionate, stretching out his nose to be stroked. But as we talk, I am distracted, and when I start to focus more on the trainer than on the horse, Be Bullish gently takes my jacket in his teeth, pulling me towards him, as if to say, “Hey—this is all about ME, remember?”

Schwartz believes in his horse’s talent while acknowledging his challenges, and says that perhaps a grass race is in his future, and maybe something longer, maybe a mile, a distance Be Bullish hasn’t tried since finishing fourth by nineteen in last year’s Sleepy Hollow on New York Stallion Stakes day. “A mile and an eighth is probably too long, but maybe a mile,” says Schwartz. The plan is to keep him in state-bred stakes races.

Like most of Schwartz’s horses, Be Bullish is bred and owned by Schwartz’s parents; John Panagot wrote about the family business last week in the Saratoga Special. As it did in the article, Schwartz’s affection for his horse comes across as he talks about his tendencies and past performances, and as he tries to figure out how to make the most of Be Bullish’s talent. As Schwartz points out, he’s only three, and as a gelding, he has the potential for a long race career in front of him. A goofy, stubborn adolescent, Be Bullish still has a lot to learn, but the trainer in the pink cart is patient, even if his grey charge isn’t.

In February Ed Fountaine wrote in the New York Post about that improbable victory:

Be Bullish…looking like Forego, made sweeping, seven-wide move to circle field around turn, came charging like freight train down center of track to get up in the final yards.

A heady and certainly premature comparison, but perhaps, as Be Bullish grows up and makes the most of his speed, New Yorkers will have another talented, charismatic gelding for whom to root in years to come… 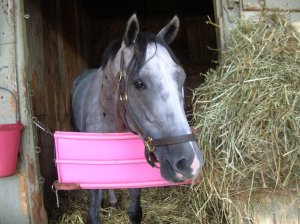 One thought on “Being Bullish”