On Saturday afternoon, the Belmont Child Care Association held its seventh annual holiday party for the children of Anna House. Scheduled to begin at 1 pm, the party started a little early to accommodate the hundreds of children and families lined up, so that the children could choose gifts to give to their family members. 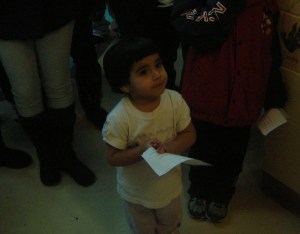 A Christmas tree, Santa Claus, and holiday treats greeted the children as they came in, and an Anna House helper then worked with them to create a shopping list: the names, ages, and relations of all the people they were shopping for. One little boy, about four or five, standing at the table to create his list, couldn’t contain himself and exclaimed, “I am SO excited!”

Children were then escorted to the “shopping center” set up in the playroom, where they could choose clothing, jewelry, toys, hats, scarves, gloves, and household items for siblings, parents, grandparents. Although the children are also permitted to choose a present for themselves, most thoroughly and thoughtfully shopped for their families before picking out something for themselves.

A number of BCCA board members were present to help, including Herb Oster, Michael Dubb, and Fay Donk; NYRA president Charlie Hayward and COO Hal Handel also made an appearance. Letty, Ryan, and Erin McLaughlin escorted children through the gifts, helping them pick out presents. Gifts and time were donated by the U.S. Marine Corps’ Toys for Tots Foundation, the Floral Park Junior Women’s Club, the Nassau County Homemakers Association St. Joseph’s Church in Garden City, and Clickits, a local knitting group. 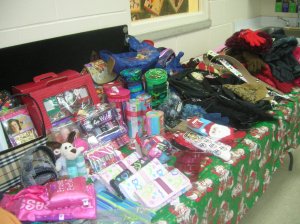 Three-year-old Jacqueline had very definite ideas about what she wanted to give to her family; she chose a lovely assortment of pastel hair ornaments for her one-year-old baby brother, and was only with great reluctance persuaded that perhaps he might like something else. “He has a lot of hair,” she noted seriously.

By 3:00 pm, the crowds had dwindled, and many sections of the room, notably the part with presents for dads and older brothers, had been cleaned out. The Christmas cookies were long gone, and Santa lifted himself a little wearily, moving on to listen to the Christmas wishes of children elsewhere.

The staff of the Belmont Child Care Association surveyed their tables, picked nearly clean, and began to count the white Christmas lists that each child had submitted; reportedly, nearly 400 children selected presents for their families over the course of about three hours.

The next morning at 5 a.m., Anna House opened, ready to take care of the children of the backstretch workers. They’ll be open on Christmas morning, too, as even on Christmas day, the horses need to be fed and tended to, and so too do the children of those who care for them. The Belmont Child Care Association relies on donations and could use your support year-round. Check out their website for ways to give, and whatever your faith is and whatever you celebrate, on the morning of the 25th, take a moment to remember that the time, money, and energy of the BCCA and its volunteers ensured that Santa made an appearance in the homes of a lot of backstretch workers.