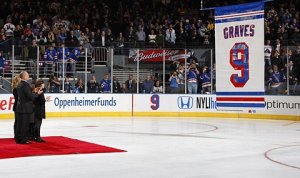 We interrupt our regularly scheduled programming for our occasional dose of hockey, specifically the retiring of Adam Graves’ #9 last night at the Garden.

Gravy, as he was known to his teammates and the Garden faithful, wore Rangers blue for ten years, coming to New York during the 1991 – 1992 season; an instrumental part of the 1994 Stanley Cup winning team, Graves scored fifty-two goals that year, only the second Ranger to break the fifty-goal mark.

As impressive as he was on the ice, Graves perhaps had the greatest impact away from the rink, his commitment to service in the community likely unequalled in the NHL. That commitment was recognized on a number of occasions: he received the King Clancy Memorial Trophy, given to the NHL player who best exemplifies leadership qualities or has made a noteworthy humanitarian contribution to his community; the Steven McDonald award (five times), given to the Ranger who goes above and beyond the call of duty, and named for a New York City police officer paralyzed in the line of duty; and the Bill Masterton Memorial Trophy for his qualities of perseverance, sportsmanship, and dedication to hockey.

As he made his way to the ice last evening, Graves walked through a hallway lined with children, a fitting honor guard for a man who has spent so much of his career trying to make the lives of children a little bit brighter. On the ice, the usual Rangers suspects were there to commemorate his career, but there were surprises, too: Mike Gartner, who should have been a member of that Cup-winning team; Tie Domi, former Graves teammate; Sergei Nemchinov, one of the first four Russian players to have his name inscribed on Lord Stanley’s Cup in 1994 (no peeking—who are the other three?).

On the ice together again were Richter, Leetch, Messier, Graves, Beukeboom. For the people of my generation, they were our team, our contemporaries. We were in high school and college when they came into the league, and we watch as their careers ascended, and became transcendent; their retirements reminded us, a little painfully, of our own aging, and as Graves’s #9 was raised to the rafters, it signified what we all knew a long time ago: the Stanley Cup era is long over, now officially inscribed in Rangers myth and lore…and history.

In this season of Rangers’ mediocrity, with a team utterly lacking a heart, an emotional center, when the Garden far too seldom rocks the way it rocked last night, the incomparable goodness of Adam Graves was honored, and with it, the magic of that 1994 spring, the memories of that team, of those wins, of that ultimate victory. And once again, for a little while, it was glorious.