There is something unsettling about the name of Peter Pan, the 1907 Belmont Stakes winner by Commando out of Cinderella. Thinking about Cinderella giving birth to Peter Pan is the stuff that childhood nightmares are made of, and “Commando” certainly brings up rather a different image from Prince Charming.

Peter Pan’s racing career was relatively short, as he retired as a three-year-old after he bowed a tendon. “Short” in this case means 17 races, still more than the current crop of three-year-olds is likely to race by the end of this year.

He was something of a superstar during his brief time on the track, racking up a number of significant victories and garnering the attention of the press. He won stakes races at three New York tracks—Brighton Beach, Saratoga, and Belmont—and according to our venerable track scribes at the Times, each was a major event.

I don’t want to say that those long-ago anonymous writers were given to hyperbole, but here’s a look at the openings to the articles on Peter Pan’s wins in the Hopeful, the Brighton Beach Handicap, and the Belmont, respectively:

The greatest crowd that ever gathered on the Saratoga race course, estimated at fully 15,000, witnessed the running of the most attractive card of the meeting to-day, and under perfect weather conditions picked winners with a precision that wrought disaster to the bookmakers from clubhouse to field. (“Tangle’s Hard Victory”)

The largest crowd that ever assembled on the biggest race course in America, the Belmont Park track, witnessed an extraordinary afternoon’s racing amid many singular happenings yesterday. (“Keene Entry Ran First and Second”)

Peter Pan, the champion of his age and the largest winner on the American turf to-day, ran the best race of his career at the Brighton Beach race course yesterday, when in a splendid finish he won the $25,000 Brighton Handicap by a neck… (“Peter Pan Wins Brighton Handicap”)

The Brighton Handicap was a noteworthy win for Peter Pan because it was the first in which he had to come from off the pace; he was apparently an inveterate front-runner, but a bad start reportedly left him at the back of the pack, much to his backers’ dismay:

…Peter Pan was forced to go around his horses and lost so much ground on the turn that the crowd, accustomed to seeing him out in front making his own running, began to lose hope.

Peter Pan did not disappoint, though; the pace-setter, McCarter, hung in there as the horses behind him tired, but Peter Pan, “ridden hard under punishment,” (you wouldn’t see that line written these days) made a run in the stretch and prevailed by a neck.

As you can see from this image, the Brighton Beach track was right on the water, and some folks apparently thought that its proximity to the ocean affected the running:

The track admittedly was not at its best when the Brighton Handicap was run, as, in addition to the fact of a shower in the night, the tide was out and was close to the ebb mark when the Brighton Handicap was run, and what ground for argument on the matter may be, horsemen have found in thirty years of racing at Brighton Beach that the track is something like a second to the mile faster just about flood tide than it is when the ebb is reached. And it was within an hour after the ebb was reached that Peter Pan ran his brilliant race. (“Peter Pan Wins Brighton Handicap”)

Had the Brighton Beach track survived the outlawing of gambling in the early part of the 20th century, contemporary handicappers might well have had to take into account yet another factor: race conditions; track conditions; racing style; … and whether it was high tide???? Scientists out there–any help with this one?

As a three-year-old, Peter Pan won the Brighton Handicap, the Belmont, and the Brooklyn Derby; he was second in the Withers, and on the strength of these accomplishments was named champion three year old in 1907. He was inducted into the Hall of Fame in 1956.

Horses that don’t run in the Derby will often use the 1 1/8 Peter Pan as a prep for the Belmont, run a month later. The last horse to parlay a Peter Pan win into a Belmont victory was A.P. Indy in 1993; in 1986, Danzig Connection did it, too.

And if any of you out there hits big on any of the Peter Pan runners, perhaps you’d be interested in purchasing an original Brighton Beach Racing Association Certificate, signed by Company President William A. Engeman? It can be yours for only $995.00. 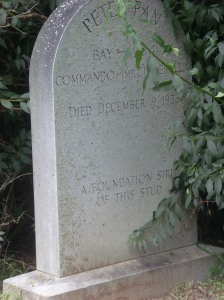