Jess Jackson talks like a man in love, besotted by a woman he doesn’t quite understand. And to think, they’ve known each other for less than two months.

“I am amazed at her beauty and her speed,” he said, following Rachel Alexandra’s ridiculously dominant win in the Mother Goose yesterday. “We have a greater burden because she’s a champion…and a lady.”

Even as he praises, he fears. “She’s so eager to run that I worry about her. The faster ones are in greater danger, the centrifugal force on the turns…I worry about her being injured. I want to see her healthy coming out.” 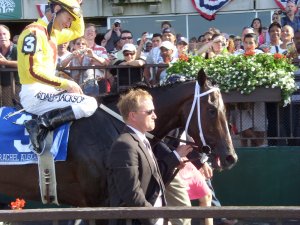 He’d like to see his filly race against Zenyatta, noting that their different running styles would make for an interesting race. “I’d like to see more horses show up to run against her; I’d like to see her run against the boys. Mine That Bird is the best of them. The classics are too close together; fresh horses come in to defeat the [ones who have run in the Derby and Preakness]. Curlin got beat by a fresh filly,” he remembers, then praises Rags to Riches’ ability. And caution, again: “It takes a lot out of a filly to race against colts.”

“I don’t know how to define her yet. We can tell when she’s ready; her eyes are full of fire. I still worry about her health. She wants to win. She’s got an attitude.”

4 thoughts on “Jackson on Rachel”