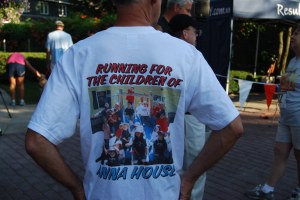 I came out of the race fine; I’ve eaten up my various feed tubs since; and I couldn’t be more pleased with the result.

This maiden runner was a little disconcerted at the start; running for the first time in a group, I found it a challenge at first to find my pace and my rhythm, but after a quarter of a mile, the field settled comfortably to head into the first turn, and I ran easily through the first mile and a half.

I assessed those around me: speedballs who had thrown it in after too-fast early fractions; experienced runners who were clearly rating, wisely waiting for the front-runners to collapse; confident stalkers pressing the pace.

As we hit the last mile, I started to pick up runners (does it matter that they might have slowed to a crawl?); I exulted when I passed the pack of eight-year-olds (only to dismay when they came roaring back past me a half mile later); I managed the small hill midway through the course with ease.

Coming into the homestretch, I couldn’t decide when to launch my bid. If I go too early, I’ll be out of gas by the finish; too late, and I might miss the chance to shave off a few seconds. I went conservative, maintaining a consistent pace nearly to the end.

I went wide on one of the final turns. One deep closer blew past me within the sixteenth pole. But when I looked up and saw the time as I reached the finish line, the fear of embarrassing myself disappeared, finally.

For someone who, in a sense, performs publically nearly every day by—by putting out hundreds of words for public consumption, or by standing in front of dozens of teenagers and trying to convince them that I know what I’m talking about—this first race was a surprisingly daunting experience. I’m glad that I did it; I’m glad that it’s over. No word yet on where I might go next; we’ll need to see if there are any appropriate spots on the calendar.

Other participants from the racing world: Joey Migliore, son of jockey Richard; all kinds of Saratoga Special Clancys; representatives from Fasig-Tipton; racing writer Sherry Ross. Robert Marks of They’re In the Gate was there, as were two regular Backstretch readers, Rich and Kathy, who shipped in from Suffolk to make the start. Stuart Chenkin and I made up Team Anna House. No word yet on how much money was raised, but thanks go to everyone for quite literally putting their bodies on the line for the good causes this race supported.