It’s the last day of week four, Monday of Travers week, day 24. We won’t see Rachel Alexandra this weekend, but Jess Jackson’s decision insures that any final weekend doldrums will be swept aside by the appearance of his super-filly in the Woodward.

Highlights of the weekend include the oft-mentioned ninth race on Saturday, in which six horses finished inches from the wire—killer way to lose a race…

Photo credit: NYRA
Several Backstretch horses of interest re-appeared over the weekend, some after a long absence. The fifth was a parade of sentimental favorites: Be Bullish, Saratoga Russell, Sargent Seattle, Teresa Pompay’s Mannington, and Allen Jerkens’s Formidable. Sargent Seattle was making his first start since last October; last summer at Saratoga, he made a similar return, that one off a seventh-month layoff. He finished fourth then; on Saturday, he was sixth.

And that was one spot better than Saratoga Russell, who threw in the first real clunker of his career. He came out of the race fine, and his poor performance was attributed to several factors: a dead rail; his distaste for the pressure from Formidable on his outside; a relatively quick return after a tough race on opening day. Good news is that he’s OK; bad news is that he had no real excuses.

On Sunday, last year’s impressive filly Jardin came back to the races. She dazzled on opening day last year, winning the Schuylerville by four; she was second in the Spinaway on closing weekend. She hasn’t been seen since, and has moved from the barn of Steve Asmussen to that of Tom Albertrani. She was fourth in her return. Into the watch list she goes…

Artist Rumara Jewett writes to let us know that tomorrow (Tuesday, August 25th), this year’s three Triple Crown trainers—Chip Woolley, Steve Asmussen, and Tim Ice—will be at the Horseshoe Inn (Gridley Avenue, corner of Nelson), along with Hall of Fame jockey Jose Santos. The event begins at 1:00 pm and a $10 donation at the door will go to the Permanently Disabled Jockeys’ Fund. Lunch will be available from the lunch menu.

And on Wednesday evening, the Belmont Child Care Association will hold its annual major fundraiser, a fiesta at the Gideon Putnam Hotel. Tickets ($250) are still available.

Last Wednesday, I was the fortunate recipient of a donation to the BCCA. Thoroughbred owner and Sherry-Lehman president Michael Yurch donated to the BCCA a number of tickets for last Wednesday’s Philadelphia Orchestra concert at the Saratoga Performing Arts Center. The evening was sponsored by Sherry-Lehman and featured pianist Jean-Yves Thibaudet, who performed Maurice Ravel’s Concerto for the Left Hand, a work commissioned in 1930 by Viennese concert pianist Paul Wittgenstein who lost his right arm in World War I. The entire evening was outstanding, but this performance was transcendent. Many, many thanks to the BCCA and to Mr. Yurch.

Though the rain didn’t arrive on Sunday in Saratoga until after the races had ended, rain in the area must have arrived earlier in the day, creating this image just before the last race. Unfortunately, the end of the rainbow and its pot of gold were not located at my seats.

And finally, in response to a couple of requests, here are some updated kitten photos. You will notice that the word “foster” has been removed from their description, and they are now officially welcomed to the Backstretch feline family. Though Crazy Catlady could only be third in Sunday’s feature, she ran, as a friend noted, “beyond her past performances,” and so I am happy to become her namesake. 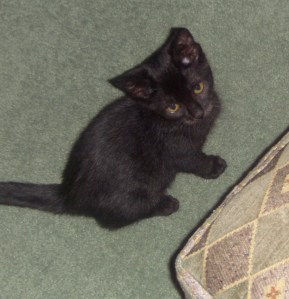