In 2009, Rachel Alexandra became at least the fourth three-year-old filly to beat older males when she won the Woodward at Saratoga, an accomplishment that in the minds of many cemented her claim to Horse of the Year honors. 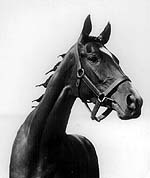 Property of the National Museum of Racing and used with permission.

That victory provided the opportunity to recall Twilight Tear and Busher, three-year-old fillies who also beat older males en route to being named Horse of the Year, in 1944 and 1945 respectively. Overlooked somehow in the conversation was Beldame, who in 1904 beat older males in the first start of her sophomore season.

Beldame was owned and bred by August Belmont II, son of the man for whom Belmont Park is named. He campaigned her at two to a 7 – 3 – 1 – 1 record; the following year, he leased her to a friend and business associate, Newton Bennington, when Belmont’s own business endeavors took his attention away from horse racing. He likely regretted that move nearly immediately.

Beldame’s first start at three was in April at Aqueduct, in the Carter Handicap, a race restricted by neither sex nor age. She won by two lengths with “speed in reserve,” beating 16 competitors, of which seven were older males.

A bit more than a month later, New York racing shifted to Morris Park in the Bronx, where Beldame took on her own sex in the Ladies Handicap. She won by three-quarters of a length, but it was her performance before the race that made the victory so impressive:

Beldame was on her bad behavior, and ran away nearly a half a mile up the stretch when starting to the post, and then, after being pulled up, bolted again, and ran away a second time while going up the chute for the start of the Withers mile. A gap in the fence saved her the chance of injury as she switched through the opening with the agility of a polo pony, and ran on through the trees and around the houses until a stable hand caught her. In the meantime her backers were panic-stricken, but there was no chance for them to hedge their bets, fortunately for them, as in the race Beldame was just as willing to run as before it. (“Hermis”)

Beldame made 14 starts at three and won 12, losing only the Metropolitan Handicap and the Test. The latter was run at Brighton Beach and was open to both males and females; as William H.P. Robertson points out, the only horses who beat Beldame in 1904 were older males.

In Women of the Year, David Schmitz relates that as Beldame rested in the fall and winter following her three-year old-campaign, the Thoroughbred Record held a contest to determine to whom Beldame should be bred when she was retired; readers were invited to write an essay in support of their candidates, the essays were judged by a committee of racing industry folk (including Belmont, Beldame’s owner), and the prizes were books on Thoroughbred racing. Allan Winn of Chicago submitted the winning entry with the British-bred Meddler his choice, and two years later, Belmont did in fact breed his mare to Meddler.

Beldame won only twice from 10 starts at four; her last victory came in the Suburban at Sheepshead Bay, in June of 1905 (six years after the wonderful Imp became the first filly to win that race). Her career as a broodmare was undistinguished, leading turf writer John Hervey to speculate in 1928 that Beldame had been “raced with objectionable stimulants that hindered her racing and broodmare career” (Schmitz). Bennington adamantly denied the charge.

Beldame’s lifetime race record was 31 – 17 – 6 – 4. She was retired in the fall of 1905, and according to Schmitz, in November of that year, the first Beldame Handicap was run; the NYRA website indicates that the first running of the Beldame took place at Aqueduct in 1939. Beldame was inducted into the Hall of Fame in 1956.

In 1904, Beldame was named both champion three-year-old filly and Horse of the Year, the third female to achieve the latter honor, following in the footsteps of Miss Woodford and Imp. In the 110 years since, 10 females have been named Horse of the Year, including three of the last five horses to earn that honor: Rachel Alexandra in 2009, Zenyatta in 2010, and Havre de Grace in 2011.

In 2009, racing fans were tantalized at the prospect of a Zenyatta-Rachel Alexandra meeting in the Beldame: two super racing females, perhaps racing for Horse of the Year honors in a race named for a female Horse of the Year. That match-up never came to be, but it didn’t stop either of those distaff runners from following in the footsteps of the great Beldame.

3 thoughts on “Beldame: The 3-Year-Old Filly That Became Horse of the Year”