Back in August, when Commentator’s retirement was announced, I wrote a column for the Saratogian expressing my wish for an upstate New York home for retired Thoroughbreds. Through various channels I hear that perhaps such a home is in the works, but for now, the two biggest retirement farms are located in the Bluegrass: the Kentucky Horse Park and Old Friends.

And so, if our favorite race horses aren’t going to have a home here, where we can see them, I guess we just have to go there. So go there I did, on my most recent trip to Lexington.

As always, Michael Blowen was the most gracious of hosts; a friend and I arrived at 8 am, and at 11:30, he was still walking us around, telling stories, jumping into tours and offering anecdotes about the horses who inhabit Dream Chase Farm.

While happy to renew acquaintances with some of my favorite horses there—Williamstown, Ogygian, Awad—I was there this time to see Commentator, the New York-bred two-time winner of the Whitney, trained by Nick Zito, owned by Tracy Farmer. 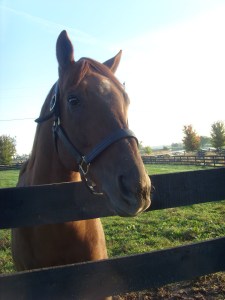 And folks…he’s doing great! I’d heard stories about his surliness, but on a crisp–OK, cold–Sunday morning, he was figuratively all smiles, walking over to the fence when Blowen called him, politely and enthusiastically accepting carrots and peppermints, bowing his head for nuzzles. Though he’d obligingly jog/run along the fence line when encouraged to do so, he seemed quite happy to laze around his paddock and accept the adoration of visitors.

Even someone as long-winded as I can’t condense a three and a half hour visit into readable length…so instead, here’s the morning in photos, with some commentary (pun intended) that I just can’t bear to leave out.

It was, apparently, a day of funny faces…

Commentator sticks out his tongue…

…while Williamstown suggests that we are all just one big bore…

Poor A.P. Slew…he gets picked on the guys who share his paddock… 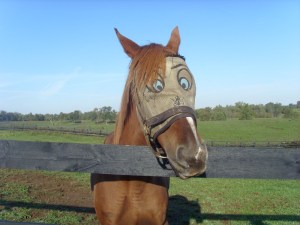 …but when he has to wear something like this, you kind of understand why.

Awad won the Sword Dancer, the Arlington Million, and the Secretariat, and he’s not likely to let you forget it. When it was just three of us at his paddock, he was as friendly as could be—carrots, yes; nuzzles, yes. (But no peppermints, thank you very much.) But when the tour group approached…well, it wouldn’t do, I guess, to be so accommodating. He sneezed in my face (much to the amusement of the crowd), then tried to bite me. He dashed off across his paddock, and he reared, up on his hind legs for endless, endless moments…then off his 19-year-old self ran.

But no matter how much he showed off, he couldn’t deny that the horse just steps away from him, the one whose paddock is closest, is the horse who beat him by a neck in the 1995 Sword Dancer. Sorry, Awad…but Kiri’s Clown did beat you that day.

“They race each other at dusk every day,” says Blowen. He looks at Awad and says affectionately, “You can’t beat him; you don’t have enough distance.” 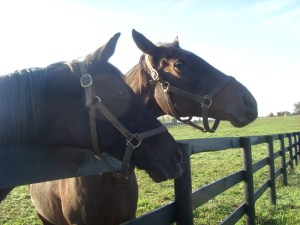 Blowen loves all of the horses at Old Friends, but Hidden Lake (here with Bonnie’s Poker) may nudge out the others in his affections. Champion older mare in 1997, she won the Beldame, the Go For Wand, the Hempstead and the Shuvee that year. Richard Migliore was her jockey, and last December, he talked with NYRA about her Go For Wand:

She was a mare that I had won two big graded races on at Belmont in the spring,
the Shuvee and the Hempstead. Going into the Go For Wand at Saratoga she was the big 3/5 favorite. Hidden Lake was much better when she ran off the pace and had
a horse in front of her to target. However, there was no speed in the race at
all. So when she broke first out of the gate I took her to the lead. At the
half-mile pole she was working much harder than I would have liked. Another
filly, Flat Fleet Feet, engaged me and we really went at it, trading the lead
back and forth. Going into the final sixteenth, Flat Fleet Fee grabbed the lead
by a half-length and I wasn’t sure that my filly would be able to battle back.

However, from the recesses of her heart, Hidden Lake found a way to fight
back and win. After the finish line she actually collapsed from exhaustion. That
was how much effort she put into winning that race. She was running on empty and
found more to give, and that is what sets the thoroughbred apart from other
athletes. They have a desire and will that few people can understand, and I feel
honored to be a part of that.

This video of the race includes commentary by Migliore.

Hidden Lake shares a paddock with Bonnie’s Poker, the dam of Silver Charm. They appear to be inseparable.

He might be forgiven for wanting to leave all New York memories behind, but Escapedfromnewyork, rescued from the Paragallo farm upstate, is apparently not quite ready to declare himself a Kentuckian. Blowen points out that the four-year-old bay gelding none too hospitably ripped up the “Kentucky Proud” sign that adorned his paddock. He’s healthy and fit, and perfectly socialized; he comes when you call, and shows no trepidation around humans. While neglected, he was not abused, and he’s taken easily to life in the Bluegrass.

As we wandered around, the 10 am tour showed up; dozens of folks made their way around the farm, hearing stories about the horses, feeding them treats, petting them. These tours are free: on my three visits to Old Friends, I’ve probably spent more than ten hours there, and no one has ever asked me for a dime. The horses and this farm exist because of generous donations from those in the racing industry and from racing fans. The dozens of horses there are well-cared for and happy, guaranteed a happy retirement until the time they join Precisionist, Ruhlmann, Fraise, and others in the Old Friends cemetery.

You can help in a number of ways, from volunteering, to shopping at the Old Friends store (in person or online), to sponsoring horses or waterers or paddocks, or simply by making a donation. Click here to find out more.

Leave a Reply to Jean in VA. Cancel reply