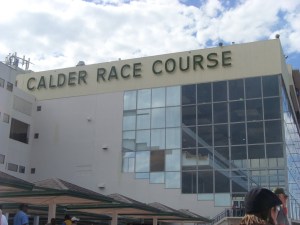 Regular readers might accuse me of never having met a racetrack I didn’t like: I’ve gushed over Gulfstream, swooned over Suffolk, waxed rhapsodic over Woodbine. In my own defense, I am occasionally discriminating: I’d be happy never to return to Philadelphia Park, and while willing to admit that I caught Turfway on a bad day, I’d venture back to Florence only under certain very specific conditions.

That said, I’m rather willing to go along with Joe Drape when he says that the best sports venue is any race track, any day, and during my recent trip to Florida, I packed in four days at the track in six-day visit.

Spurring the trip at least in part (the other part was the chance to hang out on the beach with relatives in southwest Florida) was an opportunity to visit Calder, a track that’s not running when I am generally in Florida in late March. Gulfstream’s less sexy sibling, Calder is on the outskirts of Hollywood, its next door neighbor Land Shark Stadium, home of the Dolphins. 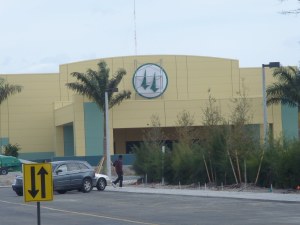 With slots set to arrive shortly, the physical plant of the race track is nearly hidden by the construction of the slots parlor—just look at those twin spires beckoning gamblers to its jangly machines!—but there were glimpses of architectural interest, particularly the exterior stone stairways and walkways. Inside, the place is pure utility: stark, slightly antiseptic, with occasional nods to racing history. At the far end of the grandstand is a largely deserted poker room.

But outside—outside shows attention to detail and to aesthetics, to presenting a visually pleasing, slightly sensual environment. The paddock is landscaped beautifully, and the sight of horses on emerald grass, underneath leafy trees near tropically colored flowers, induced a mild intoxication (or maybe that was the generously poured bourbon from one of the bars?).

Familiar faces had made way their south: Eibar Coa brought his tack here in the fall, and Rajiv Maragh, Edgar Prado, Cornelio Velasquez, and John Velazquez all rode at Calder in the last week of 2009. Coa had the good grace to bring home Caveat Cat for me, paying $9.60.

Calder ran its first meet, in 1970, at Tropical Park, which closed in 1972 and moved its dates to Calder for the Tropical at Calder meet. This year’s Tropical meet ran from November until January 2nd, when Kathleen O’Connell earned leading trainer honors, the first woman at Calder to do so.

Now I get that there are these mini-meets that run at tracks, like Oak Tree at Santa Anita, and this Tropical Park meet. But when the program says “Calder,” and the results in the Form are under “Calder,” and all articles that refer to the track say “Calder”…why does the not-so-charmingly antiquated AutoTote betting machine at the track say, on its list of tracks, not “Calder” but…“Tropical”? Just to confuse newcomers like me?

Indeed, elements of Calder do seem designed for the locals–this is not a place, it appears, that cultivates the visitor. Each announcement over the public address system began with a scratchy, unintelligible growl; inside, there’s no way of knowing that a race has gone off if you don’t have your eyes on a television, as the sound isn’t transmitted, as far as I could tell, in the clubhouse.

But for each of its perplexing idiosyncrasies, Calder also offers a delightful one. Sitting at a ground floor bar, polishing off a decent piece of race track pizza (I can enthusiastically recommend the hot dog consumed on another day—plump, juicy, salty), I overhear two bartenders talking to each other.

“Did you try the bread pudding today?”

Bread pudding? Did someone say bread pudding? Like at Keeneland and the Fair Grounds? Here, in south Florida? Really?

“I hear that they made it from leftover croissants.”

Here? Flan, I’d have expected (and welcomed). But the bread pudding at Calder was the sweetest of surprises, indulgently, sybaritically creamy and luscious, and it now enters the pantheon of race track bread puddings—élite company indeed, and all the more enjoyable for being unexpected.

If you don’t fancy bread pudding, though, perhaps you can satisfy a doughnut craving at this second floor stand? Or perhaps not, given the emptiness of the shelves…

Calder offers no shortage of diversions to those whose attention can’t be held by racing. Perhaps you need a haircut?

Or maybe you’d like to head to an open-air lounge on the fourth floor? It offers a view of the track, as well as the perfect canoodling vehicle…

You know all that rain that plagued New York stakes racing in 2009? All that griping that we did about the weather gods? Clearly that blame was misplaced, as after three gorgeous days at the track, I showed up on Tropical Park Derby day—a Big Racing Day–…and got soaked. As I did on Travers Day. And Gold Cup Day. And Showcase Day. Are we seeing a trend here?

A disappointingly small crowd showed up on New Year’s Day to welcome 2010 and enjoy the first graded stakes race of the year, and the enthusiasm of that crowd was dampened considerably by the prodigious rains that began to fall about an hour before the race. That beautiful paddock was rendered useless by the downpour, as horses were saddled inside, out of the elements; following the race, the winner’s circle photo was taken there, too, making it impossible to take low-light, wet, amateur photographs.

Dale Romans’s odds-on favorite Lost Aptitude led the field on a merry chase, only to be run down in the final strides by Kathleen O’Connell’s Fly By Phil at 23-1. Down the stretch, Lost Aptitude bore out, and he, Fly By Phil, and several other horses were way out past the middle of the track as they headed for home. Bizarrely run—take a look by scrolling down and clicking on the name of the race.

By the end of the third day, Calder was beginning to feel a little like home, Aqueduct South. We had a favorite bartender; we’d made some friends; we had explored pretty much every inch of the place. We were loving the sensible race cards: eight races, last post around 3:40. Only one day remained in the Tropical at Calder meet, but we wouldn’t be there to wish the place farewell, as northern obligations called. Calder is off my racing beaten path, but even with the rain, I am quite happy to have begun 2010 at the first stakes of the year, at this quirky little track next to the stadium. Never met a track I didn’t like? Not quite guilty as charged, but close enough.

11 thoughts on “Checking out Calder”