I came to racing too late to make it to Hialeah to see Thoroughbreds; the shuttered track has been presented to me as a Shangri-La, the epitome of all that was good and right and beautiful about racing. I mourned that I never got to see it.

But I lucked out: Hialeah would be open for racing during my winter break, and though I know nothing of Quarter Horse racing, I knew that the opportunity for an afternoon at Hialeah would be irresistible.

I thought that I might be disappointed, that I might see an old racetrack trying to be something it no longer is, to feel a little embarrassed and sad for the old place, perhaps the Blanche DuBois of race tracks, trying to capitalize on faded beauty and revive impossible dreams.

Nothing prepared me for the loveliness of Hialeah. Those who knew her in younger days might feel that disappointment, but to this newcomer’s eyes, Hialeah, unlike Blanche, more than stands up to sunshine scrutiny.

I felt a sense of magic from the moment we passed through the pillared entrance; yes, a little Rip Van Winkle—or maybe Sleeping Beauty—vestiges of a past that seems longer ago than 2001, when the last Thoroughbred ran at Hialeah. (Click on photos to enlarge them.)

Cultivated nostalgia can be a little hard to take, but at Hialeah, it didn’t feel anachronistic; Hialeah had on her party clothes, and while they might have been a little out of style, they were pure vintage clothing store, not Salvation Army.

The grandstand, damaged by Hurricane Wilma in 2005, is closed, but the bougainvillea, even if faded, drapes it majestically; here, aesthetics have to substitute for utility.

The saddling and paddock area behind the clubhouse are meticulously landscaped; Citation, winner of the Flamingo Stakes and the Triple Crown, still stands, as horses walk under the trees and visitors relax beside him. 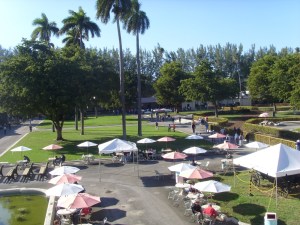 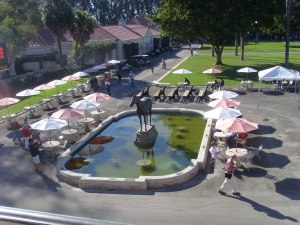 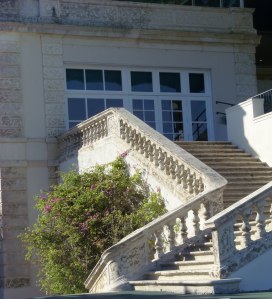 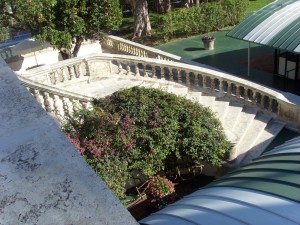 Inside, décor and memorabilia both recall racing’s past… 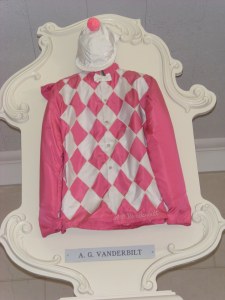 …outside, a small but enthusiastic crowd cheers on the Quarter Horses that charge up the stretch. 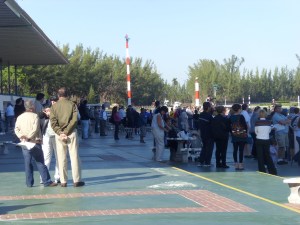 We stop in the sparsely furnished gift shop, to find the same postcards that were for sale a decade ago; behind the counter, Nilda Terrace couldn’t be happier to be back. “I worked here before,” she says. “In group sales, event planning. We’d send busses to senior citizen centers, bring the people back here for the afternoon, then bring them back home. We’d give them lunch, too. It was great. We can’t do that now; we don’t have the money, and there’s really no place for them to have lunch, because the dining room’s closed.”

She is a fan of John Brunetti, who’s brought racing back to Hialeah. “He spent so much money to get this place ready to open. Three shifts, every day.” She’s optimistic for Hialeah’s future, believing that racing will return to this storied place.

The flamingos, of course, are there—even when horses won’t, flamingos will always have a home at Hialeah—reposing in the infield. Before we arrive, I am told that they’ll fly after the seventh race; I’m disappointed, as travel plans necessitate an earlier departure. Nilda sets us straight. “It’s the fourth race, right? The flamingos fly right after this.”

We hurry to an empty clubhouse box—they are nearly all empty—for post time, but our eyes are on the infield. And moments after the race is over, there they go…as they have for so many years, as much a part of Hialeah as the race named for them. (Please forgive the very amateur video–the first I’ve taken.)

I don’t know nearly enough about what caused Hialeah to close; I know it was about racing dates and revenue and take-out and territory; I know that it was about mismanagement and bad decisions. And for Hialeah to come back as a Thoroughbred track, I know that three tracks within a half hour of each other, three independent business entities, would need to come to some sort of cooperative agreement, one that for two of the three would mean a loss of revenue.

Foolishly, naively, I want to believe that sometimes, money’s not the most important thing, that surely, creative minds can figure out an agreement beneficial to all three tracks. Would, indeed, that it were so; would that the historical and aesthetic significance of this place were enough to spur people to work together to bring racing back here.

After the flamingos fly, we reluctantly take our leave, not knowing if we’ll ever make it back to Hialeah, not knowing when, or if, Thoroughbreds will ever take to the track there again. But even if this is it, and even though I’ve missed the best of what Hialeah was, and even though a few hours in this beautiful place aren’t nearly enough, it’s better, far better, than nothing…which is, at this point, the alternative.

Click here for a full photo album (in which some of the above photos are included).