Here at the Backstretch household, we’re trying to get used to life without Madison. Several friends have recently lost close family members, and the tragedy of the world beyond our borders is horrifying beyond contemplation, so the loss of a cat does require some perspective: still, in our little world it’s been a rough couple of days, and we’ll get back on track with racing posts in the next couple of days.

For now, some news on good works, on and beyond the racetrack.

From Ernie Munick comes news of a way to help the animals affected by the earthquake in Haiti. The International Fund for Animal Welfare (IFAW) and the World Society for the Protection of Animals (WSPA) have teamed to help serve the needs of domestic animals and livestock in the aftermath of the tragedy.

ReRun Thoroughbred Adoption posted on its Facebook page that it’s at its lowest point in funds right now and could use all the help that it can get. Check out their website for more information.

From Saratoga comes news of an upcoming fundraiser for the Bobby Frankel division of Old Friends. Billed as a birthday party for Rachel Alexandra, the gathering will be held at Union Grille on Broadway in Saratoga. Seatings are from noon – 5 on Sunday, January 31st, and 50% of the tab will be donated to Old Friends. Contact Bambii Rae at 518 695 3605 or bambiirae@nycap.rr.com for more information. You can RSVP directly to the Union Grille at 518 682 2600.

Closer to home but away from the racetrack, the Fresh Air Fund is fielding a team for an upcoming half-marathon here in New York to help benefit its programs to offer summer vacations to nearly two million low-income New York City children. This one is for serious runners, folks; no little 5K for runners like me. If you’re interested in joining the team, please check here for more information.

In September of 2007, when I was thinking of starting this site, I was having dinner with my friend Wade at John’s on 12th Street. Wade had come to the races with me a couple of times (he’s actually completed the NYRA trifecta, hitting Saratoga, Belmont, and Aqueduct), and he was aware of my proclivity for betting cat horses. “Why don’t you put Madison and Floyd on there and have them make cat horse picks?” he suggested. “Brilliant!” I thought.

I called him on Sunday to tell him about Madison, and at one point, he asked what I would do with the cat horse picks. Haven’t decided, I said; can’t really bear to take her off, but it seems kind of dumb to have a dead cat making picks (we will let it slide without comment that perhaps having any kind of cat making picks might be kind of dumb). “Why don’t you leave her picture there,” he suggested, “and have the other cats’ profits go to cat rescue groups?” “Brilliant!” I thought, for the second time.

So at least for the foreseeable future, all of the cats will remain in the column to the left, though slightly re-configured. And I am once again indebted to Wade for his feline equine inspiration.

And there is, fortunately, some good feline news. Shortly before Christmas, a colleague found, shivering and drenched outside a restaurant—it was pouring out–a kitten missing one eye and apparently blind in the other (I swear that I am not making this up—it really was that pathetic). This good soul took the kitten home, but allergic, she couldn’t keep it for long. She and my vet shared responsibility of this poor little thing for a few weeks, and last Saturday, we found the kitten a new home: upstate in Saratoga, in the home of Mama and Papa Backstretch.

My mother has worked for decades as an advocate for the mentally and physically disabled, and with some reservations about having a visually impaired cat, she decided that she should take care of this little special needs kitten. 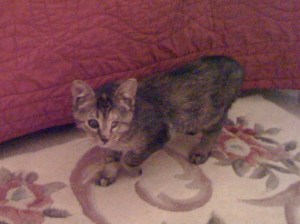 Turns out that the kitten can in fact see at least a bit from its existing eye; she is friendly and playful and engaging, and she is loving life in her new home, making friends and tearing around in her explorations. Her appearance is a little jarring at first, but her mannerisms are charming, and my mother has fallen in love with her. When she arrived last weekend, my mother took one look at her, and without a single word from me, pronounced her name: Brooklyn.

So we welcome one cat and bid farewell to another. It wasn’t quite supposed to happen that way, but it’s what we got. Thanks so much to everyone who wrote and called and posted and commented; it’s been a tremendous help in a difficult time. And after this, we turn back to racing.

10 thoughts on “Next steps”