It’s Sunday morning in Lexington, Kentucky.  Sundays are meant to be a day of rest…but there’s much, much too much to do to rest.

On the road to Keeneland for workouts, we end up behind a horse van, and we wonder which Kitten might be inside.  If the race card holds any hints, we are following Patti’s Kitten, who finishes second in the fourth race.

At the track, it’s chilly but beautiful. We run into old Saratoga friend Joe DeSantis, who works with Neil Howard, and he tells us about Lou Brissie, a two-year-old Limehouse colt out of Fearless Wildcat.  Named for a baseball player who overcame significant World War II injuries to play baseball, the colt made his first start on April 15th at Keeneland, winning impressively.  Into the watch list he goes. 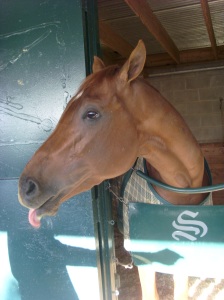 Next stop:  Shannon Ritter’s barn and a visit with Endorsement, winner of the Sunland Derby.  My profile of Ritter, who’s trying to become the first woman to saddle the Kentucky Derby winner, will appear in the upcoming issue of Trainer magazine (should be out any day now), and I wanted to say hello in person to both her and the horse.

Both are adjusting well to life in the spotlight, though Ritter doesn’t threaten to bite, as her charge does.  “He’s begun to pose for cameras,” she observes, and declares herself very happy with his workout the previous day.  In a few hours, he’s off to Churchill Downs.

It’s breakfast time.  My trips to Kentucky are not complete without certain rituals:  a stop at the Hamburg Liquor Barn; a drink at Malone’s on Tate’s Creek; breakfast at the track kitchen.  I salivate at the sight of the cooked apples and grits; I request a biscuit and am asked, “With gravy?”  “No, thank you,” I reply.  “You’re not from Kentucky,” comes the drawled rejoinder, a twinkling eye belying the disapproving tone.

Sated, I head with a friend on a post-prandial, pre-church walk around the backstretch. Thirty minutes from opening prayer to closing blessing, and we’re off, this time to visit a friend at the Phipps barn, where one-time 2009 Kentucky Derby hopeful Imperial Council is hanging out before shipping to New York later in the week.  He was last seen up here in May of 2009, finishing eighth in the Met Mile; returning to the track in February at Gulfstream, he’s been third in his last three starts. We will, perhaps, see him back on a New York track before too long.

Down the shedrow is four-year-old Colors Flying, the regally bred son of A.P. Indy and Storm Flag Flying.  He’s got one win in six starts; he, too, was third in his last start, in January at Gulfstream.  We also see Conservative, son of Unbridled’s Song; he’d raced the day before and finished—wait for it–third.  He seems unperturbed and happily mugs for the camera and a peppermint.

The racing day goes by in a blur of homily bets and cats and kittens and friends…and OK, bourbon and a little Kentucky Ale.   And a hot dog.  Keeneland may just have the best racetrack hot dog I’ve ever tasted. (And yes, if you’re keeping score, to this point in the day I have ingested:  coffee; cooked sweetened apples; grits; biscuit; bacon; eggs; a hot dog; bourbon; beer.) 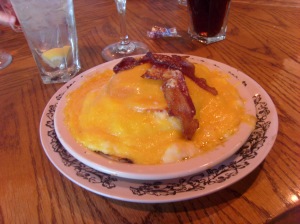 There’s a friend to pick up at the airport and then it’s off to dinner, where I am again reminded that I am not from this place. At this meal, which consists of a hot brown (if you’re keeping score, now add béchamel, cheese, ham, turkey…), I learn that Massachusetts is a foreign land, and that macaroni and cheese is a vegetable.

There are miles to go before I sleep—77 to be exact, between Lexington and Louisville—but not many hours to go before I wake up. The day of rest ends at 11:30 pm, and Churchill Downs beckons in the morning. I set the alarm for 4:30 am…and it’s Monday morning in Louisville, Kentucky…