Regular followers of New York racing might expect to see the Peter Pan, a traditional prep for the Belmont Stakes, this week; instead, they’ll be seeing the Grade II Dwyer.  Because neither the State of New York nor New York City Off-Track Betting has managed to meet its financial obligations to the New York Racing Association, NYRA cut stakes races for the spring Belmont meet:  gone is the Peter Pan, and the Dwyer is now run in May instead of in July.

At The Rail, I wrote about the memorable 1920 Dwyer, in which John P. Grier threatened to beat the great Man o’War, heading him at the eighth pole at the old Aqueduct track.  At the Belmont Stakes site, I tell the story of that eighth pole, which is currently being refurbished for installation at Saratoga this summer.

Valerie Grash at Foolish Pleasure writes about fillies who have run in the Dwyer, and on Friday, Dan Silver of NYRA sent along photos of the trophies that have been presented to winners of the race: 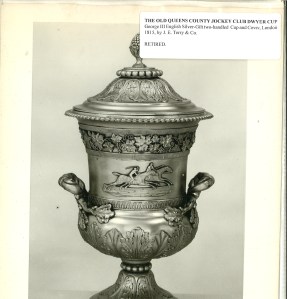 It is, perhaps, disappointing that the Dwyer has been moved from its traditional spot, and that we’ll miss the Peter Pan this year.  Then again, on this empty weekend between the Kentucky Derby and the Preakness, the Dwyer has occasioned more interest than it might have later in the summer, and its historical significance has gotten the attention it deserves.  Its relevance to the Belmont Stakes will not be determined for four more weeks—but in the essential cost-cutting in New York this spring, it’s nice to see the Dwyer hanging around.