Imp was bred in Ohio by Daniel R. Harness, the man who owned her throughout her life; in fact, Imp outlived Harness by seven years.  Her win in the Suburban, when she was five, brought a “deluge” of offers to Harness; according to Eliza McGraw in Women of the Year:  Ten Fillies Who Achieved Horse Racing’s Highest Honor, the Thoroughbred Record quoted Harness’s response:  “’I am an old man and there is no pocket in a shroud.  Imp is all I want.’”

She came back to New York the following summer, running in the Met Mile (fourth) and Toboggan Handicap (eighth) at Morris Park, and in the Brooklyn Handicap at Gravesend, finishing 15th of 16.  She nonetheless collected checks in a number of other handicap races, including one for a win at Gravesend three days before the Suburban.

By any number of measures, June 17, 1899 at Sheepshead Day was an extraordinary day of racing.  The crowd was estimated at between 25,000 and 30,000; numerous newspaper accounts emphasized the “violence” of the betting; the crowd on the infield broke through the rail as the horses ran in the stretch; the start of the Suburban was delayed 45 minutes because of a fractious colt and the reported ineptitude of the start; and in the feature race, history was made.  Oh, to have been there.

Imp sat just off pace through the early going and then took the “overland route,” according to the New York Times; it was, said the reporter, “a daring thing to do.”

But he had a fast and a game mare under him, as he happened to know, and so it turned out to be the very best thing he could have done…Once Imp was in the lead the race for the Suburban of 1899 was practically at an end…[She] seemed to have the wings of the wind to help her busy feet along…

Imp held a three-length lead through the stretch, and only by a miracle, apparently, did the horses and patrons escape injury when the rail broke.  Bannockburn cut into her margin as they neared the wire, but the chart indicates that Imp was “never extended,” winning by two.

Three days later, Imp finished second in the Coney Island Handicap, and her record as a five-year-old was 13-3-5 in 31 starts.  In October of that year, her hometown of Chillicothe, Ohio arranged a parade and holiday for her; the mare described by William H.P. Robertson as solid black except for a white diamond between her eyes was accompanied by her jockey, groom, trainer, owner, and exercise rider.  Harness’s silks were orange and black, and a horseshoe of orange and black flowers with “Imp, Suburban Handicap” and her record-setting time in red flowers travelled with her in the parade.  Her theme song, often played after victories, was “The Coal-Black Lady.”

Daniel Harness died in 1902, and in September of that year, his horses were dispersed in an estate sale.  The nine-year-old Imp was not a popular offering, and was sold when one of the auction owners, Ed Tipton, paid $4,100 for her.  According to McGraw, Imp was then sold to John Madden of Kentucky for $6,000 and had six foals for him.  She died in 1909, apparently from complications from foaling, and was elected to the Hall of Fame in 1965.

Imp’s heart, personality, and gameness apparently made her a beloved mare in her time, even if her accomplishments are not well-known to the contemporary race fan.  McGraw writes,

With her talent and perseverance, Imp kept the hearts of fans she had won along with the 1899 Suburban.  Her handlers saw to it that she was constantly tried and retried by the intense schedule they set her whole racing life.  Instead of shrinking from such a challenge, Imp met it head-on…[and] people could not help but respond with adoration…

We will never see again the likes of Imp the equine, but in a corner of Brooklyn, Imp the feline carries on the legacy of the coal-black lady… 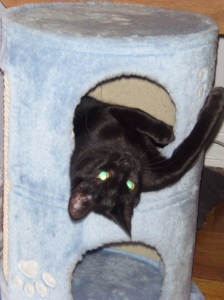 For some tasty reading and more than a whiff of 19th century racing writing, check out the articles below on Imp’s Suburban from the Times and the New York Tribune.  They are worth a read, particularly for their authors’ comments on the starter and descriptions of the betting.

And for more on Imp and her namesake, see my December post on them.

“Imp.”  National Museum of Racing and Hall of Fame.

6 thoughts on “The first filly to win the Suburban Handicap: Imp, 1899”