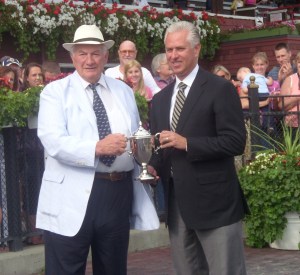 Monday at Saratoga, closing day, was a day both happy and melancholy. Happy because we were there, still there, spending Labor Day at the track with family and friends, seeing two stakes races, enjoying another gorgeous day at the Spa. Melancholy because it was the last day, because the beauty of Saratoga would be mine for just a few more precious hours, because the end of Saratoga means the end of summer.  Or maybe vice versa.

Pletcher trained eight of Repole’s winners this summer; Velazquez was aboard seven of them. Twenty-eight of Velazquez’s 57 wins came aboard Pletcher horses.

This Saratoga training title was Pletcher’s seventh, but no such honor becomes quotidian, particularly when H. Allen Jerkens is presenting it.

This year, the Saratoga training title was named in honor of Jerkens, the Chief, and on Monday in the winner’s circle, it was the Chief who presented Pletcher with his award.

No stranger to the winner’s circle, the 81-year-old Jerkens doesn’t get there much anymore. He had only one winner at this year’s meet, after going winless last summer, but even when he’s on a roll, as he was at the most recent Belmont meet, he seldom comes down to get his picture taken. He watches from the paddock, often, or sometimes from his barn, which is where he was when his Brampton won on August 27th.

He was there in the winner’s circle at Saratoga yesterday, a place in which he hadn’t stood in two years, but that is so familiar it might feel like home. He stood there when Sky Beauty and Society Selection won the Alabama, and when Onion beat Secretariat in the Whitney. He won the Saratoga training title four times, in 1972 setting a record for the 24-day meet with 19 wins.

The Chief was there, getting his picture taken, smiling broadly, handing a trophy to a man who represents a different generation, a different type of training. With only 12 horses in his barn, compared to Pletcher’s hundreds, one might think that the Chief’s presence represented little more than the passing of an era. 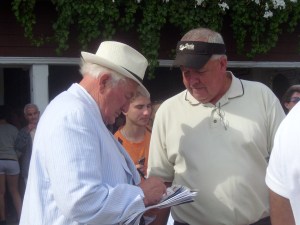 But as he left the winner’s circle, the Chief got stopped. A man held out a program and a pen; the Chief obliged, smiled, asked his name, chatted.  And a few steps later, there was another one, “Would you mind, Chief, please?”

As Jerkens walked through the clubhouse, back to his golf cart to head back to his barn and his horses, his progress was slow. He couldn’t go more than a few feet before someone else offered a hello, a memory, a request for an autograph.

The tributes were quiet and respectful, and so were his responses, low-key as he so often is. And then he made his way back to his barn, all the way at the end of the Saratoga backstretch, to be there when his horses got their afternoon feed as he is every day, as he’s done at Saratoga for more than a half-century.

I don’t often cry at the racetrack, but as I watched Allen Jerkens accept the homage of his fans, this fan of racing, of Saratoga, and of the Chief, got choked up, not for the first time, on the happy, melancholy, last day of Saratoga racing for 2010.