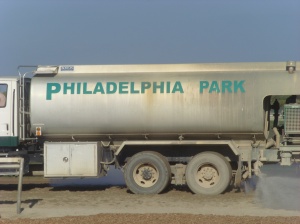 In January of 2007, I went to Philadelphia Park for the first time. I don’t recall that it was particularly cold, but it was gray, and the place had a desolate feel. We sat in the restaurant on the fifth floor; it was perfectly pleasant, but the horses seemed awfully far away: it was tough to get to the paddock, and while one could watch races from the apron, the public address system wasn’t functioning. The slot machines were clearly the raison d’etre at the track, with racing quite literally shoved to the side, and I vowed I’d never return.

I’d heard a couple of weeks ago that Rose Catherine would be heading south to run in the Turf Amazon, on the same day as the Pennsylvania Derby; over the summer, Philadelphia Park closed for a track renovation, and with the expanded gaming moved to a separate facility, the grandstand had again been given over to racing. A new track, a new facility, a new name: Parx Racing.

So when a couple of NY turf writers decided to make the road trip and asked if I wanted to carpool, off I went. And I really wasn’t breaking my word: I was going to Parx, not Philadelphia Park.

And what a pleasant surprise it was.

The weather helped:  Saturday was gorgeous. So did the crowd: the apron was packed, as was the picnic area, with enthusiastic fans who turned out for Pennsylvania’s biggest race.

Slots money meant the facility was clean and well-equipped; while some of the décor said “casino” more than “racing” (several areas of the grandstand, now devoted to racing and simulcasting, formerly held slot machines), natural light streamed in through much of the place.

The grandstand offered only indoor seating, but those wanting to take advantage of the beautiful weather had no shortage of options: fans filled the picnic area and outdoor bar at the top of the stretch, as well as plenty of benches on the apron. After each race, the winning jockey tossed t-shirts from the winning circle to those who lined up four deep, hoping to grab a Parx souvenir.

It felt a little silly to have traveled primarily to see Rose Catherine run in an ungraded stakes race…until she wired the field and won by nearly two lengths, at which point it made perfect sense.  And while that race may have been the main event for me, nearly everyone else was there for the Pennsylvania Derby, being run for the 31st time.

Winners of the Pennsylvania Derby include Dixieland Band, Summer Squall, Macho Uno, and Sun King; this year’s field featured graded stakes winners Exhi (G2 Lexington); A Little Warm (G2 Jim Dandy); and Afleet Again (G3 Withers).  The favorite was First Dude, who placed in five consecutive G1 races, and who has only a maiden win to his credit.

And once again, betting and perhaps sentimental favorite First Dude came up excruciatingly short, losing to Nick Zito’s Morning Line by a neck, after getting stopped behind horses, cutting outside, and re-rallying impressively in the stretch.

Steps after the wire in the Pennsylvania Derby: Morning Line on the rail, A Little Warm in the middle, First Dude on the outside

So when his horse got to the wire first, just barely, Zito was humble, and grateful.  “I gotta thank God for that photo. I guess he got me over the line finally.”

I don’t know what Parx will be like on a gray afternoon this January; I imagine that it will be a lot like Aqueduct, where I spend a lot of dismal winter days, though much spiffier than the fading plant out in Ozone Park.

But hey, on Friday, Genting, awarded the casino at the Big A, handed $380 million over to New York State, and the first phase of the racino is scheduled to be open next spring. Certainly, visions of a re-furbished Aqueduct danced in our heads as we wandered the slots-infused plant at Parx…and if hanging out at Aqueduct in April is anywhere near as pleasant as hanging out at Parx in September, those A trains are going to be mighty crowded.

For more on Parx, check out these posts at The Race is Not to the Swift.  Click on any of the photos to enlarge them. 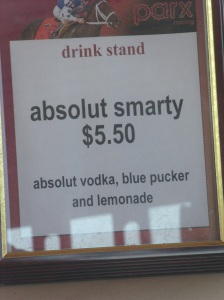 Unfortunately, Ashton Girl was not, in the Amazon… 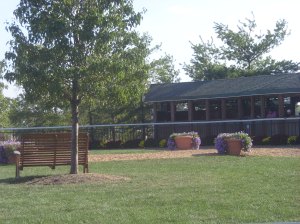 The new paddock is lovely

T-shirts and peppermints are distributed to fans… 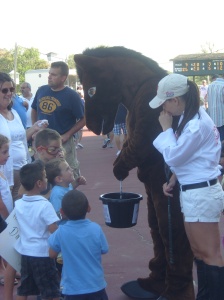 And Nick Zito is enlisted to toss a few shirts… 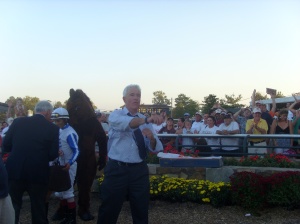 The jockeys gather before the Derby… 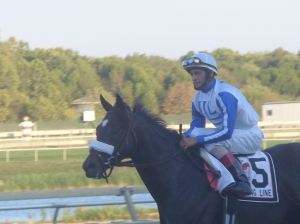