I didn’t think that I would write about Rachel Alexandra’s retirement. What was I going to say?  That I was surprised? (I wasn’t.)  That I found it odd? (I didn’t.)  That I disagree with the decision? (I don’t.)  That I’m disappointed? (I’m not.)

In the fall of 2008, my two-year-old filly of choice was Sara Louise, who was, until March of this year, most famously the last horse to beat Rachel Alexandra, in the 2008 Pocahontas at Churchill.  By the time Rachel Alexandra hit my radar screen, in the spring of 2009, she was already a Big Thing.

To my own discredit, I was one of those who couldn’t get beyond the circus to the horse. First it was the opprobrium heaped on trainer Hal Wiggins and owner Dolphus Morrison for believing that Rachel Alexandra should race in sex-restricted company. Then it was the Jess Jackson show: a filly with a bodyguard who once told fans that baskets of flowers were deliberately hung in front of Rachel Alexandra’s stall to “protect her privacy,” who told a fan who wanted to take a picture that sure, it was fine, “but please don’t come any closer than that,” “that” being about 20 feet away, and on the wrong side of the flowers.

It was pre-dawn workouts and a trainer who wouldn’t—or couldn’t?—say anything definitive about his star filly. It was gamesmanship and celebrity, even as Rachel Alexandra was accomplishing on the racetrack what none of us can ever hope to see again in our lifetimes.

I didn’t want to be a part of the circus. I didn’t want to get up at 5:00 and join the throngs at the Oklahoma—though I did, once, at the behest of some friends…oh, and friends?  Thank you for making me do that.  I didn’t want to hang around and wait for quotes that didn’t say anything. So most of the time I didn’t, and maybe I was cutting off my nose to spite my face, a habit ingrained since childhood, according to the stories of Mama Backstretch.

And it doesn’t bother me that she’s retired, either. Racing fans might want to see her keep racing, but she’s not our property, and the risk of her value decreasing is too great to keep her on the track. She won’t be what she was—who on earth could be?—so get her to the shed before she can lose again. The economics of the racetrack tell us it makes sense.

So I wasn’t disappointed when I heard that she was retired, and I wasn’t going to write about it. I still, you see, don’t want to be a part of the circus.

Then I read this:

So, I was up at Saratoga this afternoon… paid a visit to Rachel Alexandra… standing outside her stall, she stretched her neck to within inches of my face… assistant trainer Scott Blasi said “She is looking for candy.” I had none. Rachel showed immediate disinterest and paid me no mind… neat, neat horse…hopefully I can get back up there and get her a mint before she leaves

The wonderful Tim Wilkin, turf writer of the Times-Union, wrote that on his Facebook page yesterday.  And for the first time, at least for me, there she was, Rachel Alexandra the horse, not the phenomenon, reaching out to visitors for expected treats. She wasn’t a superstar or a pampered celebrity; she was just a horse who wanted some candy.

I’m sorry that I never got to see her that way. Certainly, part of it is my fault, and part of it is because of the perhaps-necessary citadel that surrounded her. Of everything that I’ve read in the last 48 hours, Wilkin’s words about the magnificent filly, the words that made her homely and horsy, are the ones that touched me the most, and will make me miss her. 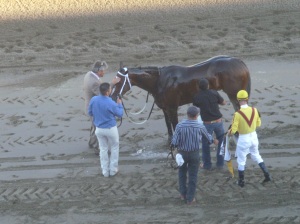 20 thoughts on “The words of Mr. Wilkin”