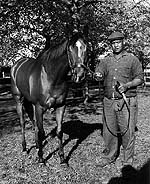 I haven’t yet seen Secretariat, though what I’ve heard about it suggests that perhaps it will be a Netflix or pay-per-view rental, instead of a $12.75/ticket night out in New York City.

The absence of Riva Ridge – in even so much as a mention – from the movie has raised the ire of a number of commentators, but I guess it would ruin the whole damsel in distress portrayal of Penny Chenery to mention the inconvenient fact that even as her magnificent 2-year-old Secretariat was winning races at a hefty clip, she was enjoying owning a Kentucky Derby and Belmont winner.

And if Riva Ridge is going to get ignored, we can hardly expect that Cicada will merit so much as a glimpse.

Cicada was bred by Penny Chenery’s father Christopher at his Meadow Stud. She didn’t win any Triple Crown races – though serious consideration was given to running her in the 1962 Kentucky Derby – but her record at two might even have made Big Red blush a little.

Today’s running of the Grade 1 Frizette at Belmont Park offers opportunity to recall the only filly to be named a champion at two, three, and four. Among the 11 races Cicada won at 2 was the Frizette; she also had two seconds and three thirds year. She started 16 times; she hit the board 16 times.

Cicada is one of my great historical favorites, and I was thinking of her this summer, when browsing through some old Saratoga programs that had been loaned to me by a neighbor (geography is indeed destiny), I came across this:

The Spinaway was Cicada’s 12th start that year; she’d already won seven races, including the Schuylerville earlier that month.

After winning the Matron and the Astarita at Belmont, she added the Frizette to her 2-year-old résumé, finishing off 1961 with a 10-length win in the Gardenia at Garden State. She had earned more money than any 2-year-old filly in history, and she was that year’s champion.

At 3, Cicada raced 17 times, notching eight wins, including the Kentucky Oaks, the Acorn, the Mother Goose, and the Beldame; she lost the Florida Derby by a nose to Ridan.  At 4, she won the Sheepshead Bay, the Vagrancy, and the Distaff.  These campaigns added two more championships to her list of impressive accomplishments.

Cicada’s breeder, Christopher T. Chenery, didn’t get lucky with her; he had already bred 20 stakes winners by the time Cicada came along. In addition, he was instrumental in the founding of the New York Racing Association, and according to Edward L. Bowen, “Chenery and his associates more or less saved the status of the New York Turf.”

By 1971, Chenery had another 2-year-old champion in Riva Ridge, but his health had so deteriorated that he was living in a nursing home. Writes Bowen, “Tears were said to have rolled down his cheeks when a nurse told him of Riva Ridge’s victory in the 1972 Kentucky Derby.”  By the next year, he was reportedly so ill that he was unable to enjoy Secretariat’s season for the ages.

In Legacies of the Turf, Bowen notes:

Of [Chenery’s] forty-three stakes winners, five (12 percent) were champions, of which two were Horse of the Year. Three of them won a total of six Triple Crown races. Four are in the Hall of Fame (Hill Prince, Cicada, Riva Ridge, Secretariat). Three of Chenery’s mares were Broodmares of the Year (Hildene, Iberia, Somethingroyal). Not quite fitting into any of these categories was sir Gaylord, a sire of international consequence.

During Chenery’s illness, daughter Penny stepped in to manage the family’s racing operations, and in fact, racing historians note that it was she, more than her father, who was responsible for Secretariat’s breeding.  It is she who will be forever linked to the 1973 Triple Crown winner, she who takes center stage in the movie about Secretariat’s life, she who needs rescuing from a terrible fate by the super-horse who comes to save the day.

That rumbling? It’s Mr. Chenery, Cicada, and Riva Ridge, turning in their graves.

Click here for another BB post about this terrific filly, and thanks, NYRA, for this video about her.

The Times articles may require a subscription or payment.

From Belmontstakes.com, Cicada in the Acorn

Photo of Cicada from her page at the National Museum of Racing and Hall of Fame.

17 thoughts on “Before Secretariat, Cicada”