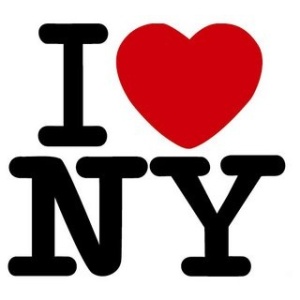 How do I love thee, New York Showcase Day? Let me count the ways!

Tomorrow at Belmont Park is all about New York, on and off the track. And having spent all but 10 years of my life here, I am rather an unabashed cheerleader for all things Empire State.

(OK, maybe not all things. Not our state government, for one.)

And really, on Showcase Day, what’s not to love?

First of all, there’s free wine: five New York wineries will have a tasting in the lobby of the clubhouse. In the grandstand, visitors will find cheese, fruit spreads, and jams, to taste and to buy.

Out in the backyard, families will find a scavenger hunt, a hayride and pumpkin patch, face painting, a pumpkin carver, and pony rides and much more…all FREE for children 12 and under (think of all that money you’ll save for gambling).

On the track, the New York-breds will take center stage. So fine, Haynesfield, you go to Kentucky and tangle in open company (sniff.  Open company? They’ll just let anyone in…) and we’ll stay home at Belmont…and be really, really, really glad that you’re not here, too.

But even without him, the card is full of Backstretch and New York favorites, with no shortage of hunch betting opportunities with which to avail ourselves.

Be Bullish, claimed from Scott Schwartz at Saratoga this summer, comes back to Belmont from his new Finger Lakes home to run in the Hudson; he was fourth in the 2007 Sleepy Hollow (another Showcase Day fixture) to Giant Moon, and ran last year in this race, not faring too well.  Perhaps the third Showcase time is the charm.

Hessonite, last seen breaking her maiden at Belmont on September 18th, makes her third lifetime start in the Maid of the Mist, named for the steamboats that operated on Niagara River in western New York. 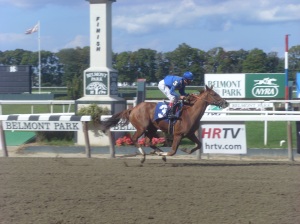 In the second race, a maiden race, how can you not bet Adirondack Summer, making his first lifetime start on New York Showcase Day?

And in the Mohawk, can you really overlook Spa City Fever?

And in the Maid of the Mist, don’t you ignore Ausable Chasm at your peril?

I’d like to thank personally the connections of Giant Moon, Wishful Tomcat, Naughty New Yorker, Ruffino, and Icabad Crane for offering the chance to bet the perfect Brother Backstretch five-horse dime super (three horses on top, those three + two more in each subsequent spot–$7.20) with five horses I love to see run.

Giant Moon will be hoping to make it two-for-two on Showcase Days; on the day after the Jockey Club Gold Cup, Rick Schosberg wrote, “Moon’s happy!” Much as Schosberg admires Haynesfield and assistant trainer Toby Sheets, both he and his horse will be quite happy to watch Haynesfield run in two weeks, rather than tomorrow. 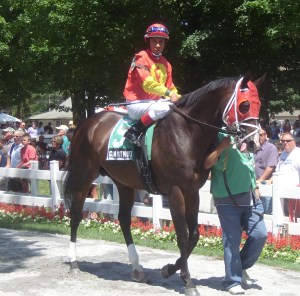 Naughty New Yorker ran in the 2004 Sleepy Hollow as a maiden; it was his fourth start, and he finished second, 7 ½ lengths behind Galloping Grocer (remember him?) and 2 ¼ lengths in front of Carminooch (remember him?).

He raced in the Empire Classic the next year, finishing sixth (Spite the Devil won); he was sixth again the next year. Fourth in 2007, he didn’t run in the race in 2008, and last year he finished fifth.  Maybe the sixth time is the charm?

Jim Bond’s super-game Ruffino finished less than a length behind Haynesfield in this race last year; a lightly raced seven-year-old, from 18 starts he’s got a record of 8-4-3.

It’s too bad that Icabad Crane’s not a perennial two-year-old, because with that name, he really should be racing in the Sleepy Hollow.  And while, full disclosure, he’s not up there in my racing heart with those other four, on New York Showcase Day, how do you not include a horse named for a New York literary legend?

And then, of course, there’s my Crazy Catlady, who’s never run on Showcase Day and who has raced so well in her three starts this year; she’s got two thirds and a fourth, but has been beaten by less than four lengths altogether. She apparently comes by her name honestly; she’s a daughter of Freud (Storm Cat) and Lady Groush, and according to her owner, she exhibited some less-than-totally-rational behavior in her earlier years.

Now, she welcomes visitors to her stall, gentle and affectionate; on the racetrack, she’s game and determined.  And at this point, overdue for a win. Let’s hope that she rewards her connections’ faith.

In a bit of terribly practical news—and I do mean terribly—the Long Island Rail Road is essentially out of commission this weekend, so those of you who usually get to Belmont via the Queens Village station are pretty much entirely out of luck.

NYRA has suspended its shuttle bus from Queens Village to the track, and instead will provide a free shuttle between the Jamaica station and Belmont.  The bus will pick up visitors at noon at Jamaica, and return from Belmont Park’s center gate at 6:15 p.m. on both Saturday and Sunday.

Many thanks to Daily Racing Form for past performance information.