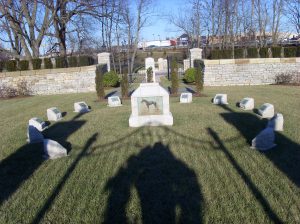 The envelope for the key to my room tells me that my hotel “sits on some of Lexington’s oldest thoroughbred farm land. It spans some 1300 acres, and was once an integral part of the Madden Family’s (sic) ‘Hamburg Place Farm.’”

John Madden named his farm after his champion two-year-old colt; according to Maryjean Wall, Madden purchased the son of Hanover for $1,200, and, racing in New York, Hamburg won 12 of 16 races in his first year on the track. Madden then sold the colt for, according to the Racing Museum and Hall of Fame, $40,001. With that money, Madden purchased the land that would become his horse farm.

Madden was a successful owner, breeder, and trainer who began his career racing standardbreds but who proved equally – if not more – adept with Thoroughbreds. He owned and trained Plaudit, winner of the 1898 Kentucky Derby; his New York Times obituary indicates that he bred six Derby winners (Plaudit, Old Rosebud, Zev, Sir Barton (the first winner of the Triple Crown), Paul Jones, and Flying Ebony), though other sources indicate that he bred only five; he bred four winners of the Belmont Stakes, and five members of the Hall of Fame. He was leading trainer from 1901-1923 and leading breeder from 1917 – 1928.

Madden holds a particular place in Backstretch hearts because in 1902, he took in Imp, the filly who won 62 of 171 starts and was the first distaff winner of the Suburban, when no one else wanted her.

In the recently published How Kentucky Became Southern, Wall writes of Hamburg Place,

The farm was renowned for its pastoral beauty, for its novel equine graveyard, and for the champion horses among its stallions and broodmares. Serenity prevailed in this place, where one writer, seeing the farm at twilight, described an ethereal scene “with fresh, soft air” to breathe as “the mists of darkness were gathering, with the afterglow rose above them.”

Hamburg Place could truly be referred to as one of the show places of the country. There he maintained a cemetery for the horses, with their names and histories engraved on tombstones, and monuments. Also on the vast acreage was a shelter for horses whose racing days were over, but for whom he held great affection.

Hamburg, the champion colt, now gives his name to a section of Lexington that is the embodiment of suburban sprawl, home to dozens of chain hotels, stores, and restaurants. It is as soulless now as it was splendid then.

At least some of Hamburg Place’s famed monuments were saved; in 2005, a number of equine graves were moved to make way for the construction of a Wal-Mart and a Lowe’s, and two years ago, Maryjean Wall took me to them. 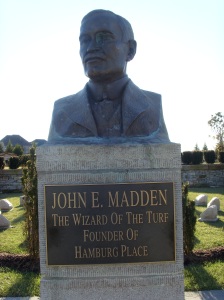 If you walk to the back of the parking lot and go down a little hill, you’ll find the graves of Imp and of Plaudit, among others, and a statue of Madden – one that appears to be suffering from neglect.

I saw them on a cold late winter afternoon two years ago; despite (or maybe because of) the shadows and the looming behemoths of the big box stores above, the little cemetery still felt sacred, still felt tangibly important, due in no small part to its isolation and solitude.

Aside from the street names of the shopping center – Plaudit Place, Sir Barton Way – that recall Hamburg’s greats, this little plot is the only remaining trace of Madden’s magnificent Hamburg Place. Many visitors to Lexington find themselves in Hamburg, taking advantage of the hotels, restaurants, and stores. If you are among them – or if you live here – detour off the congested, commerce-driven local roads, and stop for a moment here. It is a beautiful antidote to the frenzy that surrounds it, and a simple, if wholly inadequate, monument to the farm whence it came.

Sources and further reading and photos

More photos of the Hamburg cemetery.