Last Tuesday morning, I bundled up against 19 degree cold, scraped the snow and ice off my car, and headed north to Pawling, New York, to visit Akindale Farm.

I’d been there once before, last summer, to visit Evening Attire and talk to Erin Pfister, who runs the farm’s rescue division, for a story for Thoroughbred Times; though Akindale has been around decades, it made national racing news in 2008 when it became the retirement home of Evening Attire.

Much has changed in the last eight months. Last summer, Evening Attire’s half-brother Tacticianor was rescued, sick and injured, from an auction; following rehabilitation, he joined his more famous sibling at Akindale. And last month, stakes winner Hotstufanthensome shipped from New Vocations in Kentucky to become the farm’s latest high-profile resident.

Akindale is more than a rescue/retirement facility; it’s a breeding and racing operation, at this time of year awaiting the arrival of foals. My first stop with Erin is to see one of the latest arrivals, a colt by Grand Slam out of Akindale homebred Them There Eyes. This week-old foal is a third generation Akindale baby: Them There Eyes is by Holy Bull and out of So Long Dearie, another homebred; So Long Dearie was sired by D’Accord, the 32-year-old Akindale patriarch still going strong on the farm, though not in the breeding shed.

Them There Eyes grew up on the farm and raced for Akindale, making 24 starts (6-2-2) and winning the 2008 Mount Vernon at Belmont; her mother raced only once, in 2001. So Long Dearie finished last in that race and promptly came home to become a broodmare, foaling Cayo Hueso (City Zip), who’s currently racing and has two lifetime wins, and My Dinah (Victory Gallop), who won last summer’s Fleet Indian at Saratoga. A 2006 colt by Congaree, Don’t You Linger, made 18 starts and retired a maiden.

So Long Dearie’s most recent foal, a Tale of the Cat filly, was born the day before I arrived and was shy with visitors, staying close to mama but looking with curiosity long enough for me to catch a glimpse of the beautiful blaze on her tiny face.

So Long Dearie and her filly

All foals born at Akindale have a home for life, no matter where their racing careers take them; a note on their foaling papers instructs future owners and trainers to let Akindale know if the horse ever needs a home, and that’s exactly what happened with Barefoot Blues.

Born in 2006, by Vicar out of Sugar Blues, Barefoot Blues made six starts (at Arapahoe, Zia Park, and Sunland), earning a win, a place, and a show, and one day Akindale got a call from his trainer, saying that the four-year-old needed a home. He now shares an Akindale paddock with a 25-year-old retired standard-bred named Jimmy; a retired pony named Action; and Astrologist, who was bred by Arthur Hancock and who, though running mostly in claiming races, set a track record for the mile at the Meadowlands on November 8, 2005. He’s hanging out at Akindale as he learns a new career as a show horse. 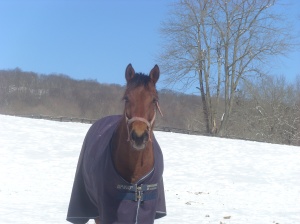 Back later in the week with a look at some of Akindale’s more well-known inhabitants, including a Backstretch fave who inspired this recent visit. As always, double click on photos to enlarge them.

In Thoroughbred Times, a profile of the farm.

Past performance information courtesy of Daily Racing Form; some pedigree and progeny information from Pedigree Query.