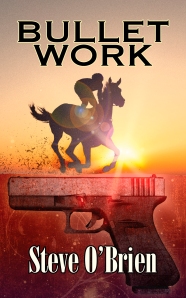 Steve O’Brien picked up the phone on Sunday, April 10th, the day after the Wood Memorial, and before I finished identifying myself, he asked, “What happened to Uncle Mo?”

O’Brien is a racing fan. He grew up in Grand Island, Nebraska, and broke his racing maiden at Fonner Park.  “I first went with my family when I was little,” he said, “and then when I was in high school I’d sneak out to the track. I went out for the golf team, but I never made to the golf course. I went to the track instead.”

In college O’Brien worked as a mutuel clerk at the Lincoln State Fair races, and after he graduated from law school, he bought into some horses with friends.

Speaking from his home in northern Virginia, O’Brien said that he never worked on the backstretch, but his time there as an owner, at the tracks in Nebraska and Oklahoma, made an impression on him.  “I liked hanging out there, watching what’s going on.”

It’s no surprise, then, O’Brien’s novel, Bullet Work, is set on the backstretch of a track in Virginia.  Nor is it a surprise that the man who likes to read John Grisham and David Baldacci wrote a mystery in his first attempt at a novel for grown-ups.

Set at the fictional Fairfax Park, located south of Washington, D.C., Bullet Work is the story of Dan Morgan, a lawyer who’s recently gotten into racing as an owner. It’s tempting to assume that Morgan is O’Brien himself, but the author quickly corrects that impression.  “There are some similarities between us – I’ve always liked horse racing, and one summer I went to the track every day.  But Dan’s personal dynamics and mine are not similar at all.”

Morgan is recently divorced and he’s got a promising young filly. His excitement about his horse’s prospects, though, are quickly tempered when Fairfax Park is beset by a campaign of terror and extortion; trainers who don’t pay up risk injury, or even death, to their horses.

The novel follows the track’s response to the extortion attempts, and along the way O’Brien introduces readers to the world of racing at a small track. There’s an intuitive female groom in whom Morgan has more than a passing interest; a group of friends and gamblers who offer handicapping and betting tips; a young man with a magical ability to understand horses and pick those who are going to win.

O’Brien sprinkles the narrative with bits of exposition, explaining claiming races, speed figures, and the uses of medication in racing, but the plot moves quickly, tracing the budding friendship between Dan and Beth, the pretty groom, and between Dan and A.J., the mysterious young man who is both respected and mistrusted, as the stakes get higher for both Dan’s filly and for the trainers trying to decide whether to pay up or put their horses at risk.

O’Brien names Cormac McCarthy as his favorite author, and readers will find some McCarthy-ish grit in the novel; like Lord of Misrule, Jaimy Gordon’s award-winning literary novel about life on the backstretch, Bullet Work presents an often unattractive view of what happens behind the scenes.

“I was out of my mind when I heard that Lord of Misrule won the National Book Award,” O’Brien enthused.  “Not because my book is like it, but because it was about horse racing, in the same sphere at my book.”

Lord of Misrule has come under fire from some in racing who object to the negative depiction of life at a small track, but O’Brien’s not worried about that criticism, about his own book or about Gordon’s.  “There’s corruption at every level in the sport, not just at small tracks. And the corruption in the sport is very low. Competition is very, very high, and everybody’s watching everybody else. I don’t think that her book did any damage to the industry; I think it did it some good.

“I want the bad characters in my book to be viewed as terrible people. I went through a lot of personal soul-searching when I thought about horses getting harmed; that was hard to write. But you can’t hate the bad guy unless you can see him doing something bad. That’s the reason that I did it.

“Bad things happen in every walk of life; desperate people do terrible things. I see it in what I do for a living.”

O’Brien practices international, employment, and corporate law; perhaps surprisingly for the man who wrote a crime novel, he deliberately avoided criminal law.  He explained, “It would bother me if my client actually went to jail.  In what I do if somebody does something bad, he has to write a check, not go into a hole.”

But his work as a lawyer does infuse the novel.  “People react differently under stress: financial stress, expectation stress, relationship stress. They do things they wouldn’t normally do, and they rationalize it in ways that don’t make any sense upon reflection.

“One of the bad guys in the book has just been on a bad streak, and the plot is his way to get even. He doesn’t realize that it would get away from him. Like most criminals, he always thinks that he can stop it.”

O’Brien hasn’t owned horses for several decades; he lives in northern Virginia with his wife and one child who’s in high school. Another child attends American University.  “I play golf, a read a lot. Unfortunately, I work a lot.”  When he goes to the races, he goes to Laurel and Pimlico.

He gets his racing news from Daily Racing Form – “it’s just a staple for me” – and from blogs. “I like the personality of blogs, and the life in their writing. You can read the news or you can read commentary; if you know the news, you want to hear the commentary.”

“I like the process of writing,” O’Brien said.  “When I have a good day, when I write something and feel good about it, it means more to me than anything else.”