“One of my earliest memories,” recalls poet Andrea Cohen, “is Dreamland. When one is going off to Dreamland, one is riding a stallion.  When I was very young, before going off to sleep, my brothers and I would say, ‘See you in Dreamland,’ and we’d describe the horse we’d be on.”

That’s about the closest that Cohen’s gotten to a horse, but equines are nonetheless part of her poetic life.

She hadn’t, she said, thought about that memory for years, but as she prepared to be interviewed about her collection of poems called Kentucky Derby, the memory came back, unbidden.

“Horses are very much a part of my imaginary landscape,” she explained, “a sort of a crucial landscape.  I really have no relationship in my life to horses except for in the landscape of the imagination.”

Nonetheless, horses make regular appearances in her work. In one narrative poem called “Petition,” a work horse is the central image, its life set in grim contrast to that of a woman Cohen knows who spent 11 years in a Siberian prison camp, where the horses had it better than the humans.

“I was inspired by a story in her book,” said Cohen, “and embellished it. The horse imagery comes from her.”

At Morrison’s Cafeteria, Jell-O
came in yellow, green and bright
red squares, like sawed blocks
of ice that couldn’t sit still,
like the horses’ hooves
they were, still racing
around the track…

“As a kid I’d watch when the races would be on, and when I heard that Jell-O was made from horses’ hooves, I looked at it differently,” she said. (Snopes debunks the hoof/Jell-O connection.) The poem makes clear that that childhood association was a strong one:

O, love is strange, we do
strange things: give a child
a wild-eyed herd of horses
in a bowl and expect
her to get better.

Cohen is speaking from the MacDowell artists’ colony in Peterborough, New Hampshire, and it’s been a good day.  “Today I feel like I got a poem, an analogue to ‘Kentucky Derby.’ I wrote that one here two years ago, and I feel lucky like that today.”

She’s never been to the Derby; in fact, she can recall having been to the races only once in her life, a long time ago. “It was in Arizona when I spent a summer there, the summer of 1990, I think,” she recalled.

But riding in a car two years ago this week, she got a call from her friend Anna. “The Kentucky Derby is starting in 20 minutes said,” Anna said. “I’m 18 minutes away,” Cohen replied. “OK, I’m coming.”

According to Cohen, the poem is narratively accurate. “I was meeting people I’d never met, and there were a lot of people there, all really excited about the race.

“I wrote the poem the next day.  Sometimes when I write, very often it’s associative, and I think that’s what you see in the poem. It starts off literally in the bar watching the race, then it kind of springs off from there, into other things I’m thinking about.”

She talked about the endless replays of the race, seeing it over and over and over. “And then,” she commented, “things happen in my head. That name – Mine That Bird – brought to mind linguistically ‘mynah bird,’ and suddenly I’m in South Carolina in my childhood.”

She compared the process of writing the poem to her “own kind of race.” “It’s not orderly around the track,” she observed. “It might be a straightaway, or it might veer into the past or the imagined, but it’s still heading towards the finish line of the poem.

“As I’m writing, I don’t know where that finish line is, and that’s what’s great about writing.”

Cohen confessed that she’s paid no attention to this year’s Derby hype. “But,” she said. “I will watch the Derby again this year, in the same place.”

Next year in Jerusalem,
with mint juleps. This year
in Peterborough, with Wyatt and Anna,
arriving at Brady’s Sports Bar one minute
before the two-minute event begins.
In my minute, I circle the oval
faux-oak bar slowly, scanning for someone
I know. I say hello, people
make space for me and bring
a very cold beer. Anna says:
I would not like to get in those
small spaces, meaning whatever you call
the starting pens. Wyatt sizes me up
the way jockeys do. Full disclosure:
I’m too big to ride, too small
to amount to anything big. Then
they’re off to the races: a muck-up
at the start, par for the course, and one
horse falls back. Root for #12, Anna says.
She likes 12 because his owner
won’t dope him. Go General Quarters, I say.
The horses run. I am vaguely aware
of a recent tragedy in which the winning
horse stumbled, another in which many
horses succumbed to bad supplements.
There are other tragedies, of course, some
involving horses, some not, but we
won’t delve into those. This is a two-
minute extravaganza and we’re meant to focus
on the horses and the riders not the men
in flannel caps, the men in their cups, howling
who-knows-what for who-knows-horse.
This is a moment to be in the moment and I
fail terribly, knowing nothing about
ponies, thinking: this is like a whirlwind
tour of abstract expressionism, which I don’t
get because I don’t get what was poured into it.
But my beer, confirmed on the second sip,
is exceedingly cold, with a taste of caramel and barrel,
and then someone wins the race, which sort
of means it’s over and also just begun, since
now the replays start, with aerial shots
that show the winner. Who’s that, who’s that?
everyone asks, as the horse again swifts
from behind, finding his opening
the way any of us might
hope to, if the seas evaporated
on our behalf. And then the horse’s name:
Mine that Bird, which seems strange, which
for me brings to mind the mynah bird my Uncle Joe
kept in a brass cage in Lipsitz Department Store
in Beaufort, South Carolina, a bird named Lippy whose two-
phrase repertoire included Where’s Joe? And Stride Rite,
Stride Rite, the brand of shoe whose purchase
came with a plastic golden egg
filled with candies. What could be better?
Nothing, except the headline
of the obituary the day Lippy
the mynah bird died: Death
of a Salesman. I kid you not.
If Lippy were here in this bar, he’d
catch on quick, repeating Mine
that Bird, Mine that Bird. But
Lippy’s not here. Instead, it’s Wyatt
and Anna and me, and we agree, watching
the tiny, winning jockey sniffing
roses thrown his way, that as soon as he
dismounts the screen, he’ll eat and eat
and eat, so he no longer resembles an Irish
Holocaust survivor grinning into the sunset.
I am going to eat, too, I tell my friends.
I am heading back to my version of Eden, where
my days are numbered, but I’m fuzzy
on the number because sometimes fuzzy is easier,
and I’m a little fuzzy now, after half
a beer, reaching for the sweater on the back
of my bar stool. It’s a white sweater, it’s soft, and Anna
kindly reminds me that it is hers, and I leave
them, leave the sweater, and loop up the hill
towards corn bread, red beans and rice.
I’m late to mess, and someone pours me
a glass of Malbec, someone sits down next to me.
I’m being cared for as if I’ve been wounded,
which I suppose is the case, though I
don’t want to know to what extent.
Someone says that once she was allowed
to choose a favorite food for dinner. Her sister
chose butter, she chose honey. We are all
made of honey and butter and one of us has a yellow
school bus which we board from time to time
for a field trip that involves riding in circles
and falling asleep, which involves
all of us being ponies in a meadow.
The sea and the sky are made of grass.
It can’t last. It lasts. 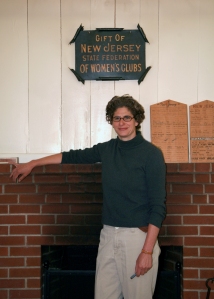 Cohen’s poems and stories have appeared in The Atlantic Monthly, Poetry, The Threepenny Review, Glimmer Train, The Hudson Review and elsewhere. Her poetry collections include The Cartographer’s Vacation, winner of the Owl Creek Poetry Prize, Long Division, and Kentucky Derby. She has received a PEN Discovery Award, Glimmer Train’s Short Fiction Award, and several fellowships at The MacDowell Colony. She directs the Blacksmith House Poetry Series in Cambridge, MA; click here to visit her website.

One thought on “The poetry of Kentucky Derby”