“What are the odds,” asked Ken Ramsey, “of naming a horse Derby Kitten and him getting in the Derby?” He can’t contain his glee; he’s laughing infectiously, and everyone within earshot smiles with this man, taking such obvious Joy (yeah, pun intended) in his Derby contender.

Last year, I spoke with Ramsey about his Kitten-naming methods. Those Kittens are named after friends and family, with the more promising horses being named for those closest to Ramsey. They make sense.

“But…this one?” I ask him, a little hesitantly.

He laughs again, effulgently, contagiously. He gestures to a nearby grandson.

“That’s William,” he says. “Last year we had William’s Kitten on the Derby trail; he was a good one. This one is a full brother to him, and looked just as strong and nice as William’s Kitten did, so we hung the name ‘Derby Kitten’ on him.”

When I suggest, hesitantly, that such a name might be a jinx, it comes again: that laugh. “I’d say so!” he says. “And the exacta here could be with the other horse most appropriately named, Twinspired.” Both trained by Michael Maker, Twinspired and Derby Kitten are stabled next to each other in barn 41. Clearly, this is not a superstitious crowd.

Ramsey is hanging out at the barn with a nephew, Stevie Jones; Daniel, a photographer friend; and two grandsons: William and Nolan. The latter’s middle name is Grant, as in Nolangrant’s Kitten. “He didn’t turn out to be much,” says Nolan, unperturbed by his namesake’s mediocrity.

It takes us thirty minutes to walk half the length of the shedrow; Ramsey can’t go more than a few steps without greeting or being greeted by fans, friends, trainers. He poses for innumerable photos in his red Kitten’s Joy jacket, he shakes hand after hand, and he just keeps laughing, delighting in friendship, conversation, and conviviality.

“I wasn’t shocked when Derby Kitten won the Lexington, I was stunned.  We ended up winning back to back stakes races that day,” he says, as if I didn’t know that the Holiday for Kitten/Derby Kitten double paid $171.80. When Ramsey hears that no, I didn’t in fact have it, he…laughs.

“You gotta look at the DRF tomorrow,” he says. “We’ve got an ad coming out, and you’ll like it.” He’s right.  (click to enlarge)

And then he drops a bombshell:  “We didn’t name the Kitten crop this year after the Kittens. We’ve got only one.”

William has a twin sister Stephanie, who somehow, according to Ramsey, “did not get a Kitten.” It wasn’t, he hastens to add, intentional, and the oversight, when discovered, was quickly rectified. “So now,” Ramsey says, “we have a Stephanie’s Kitten two-year-old, and that’s the only one. We’re off the Kittens.”

But surely…surely if Derby Kitten lives up to his name, surely Ramsey will reconsider? He’d have to, wouldn’t he?

Derby Kitten: I’m counting on you. 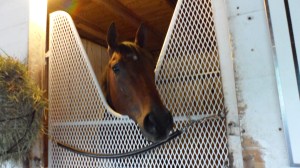