Two days later, Talented Princess posted a workout at Belmont, and she’s been working regularly ever since. The scent of Morine’s Victory remained cold, though, until Pollock saw on a message board that the horse had been rescued out of a kill pen in Cranbury, New Jersey.

Thanks to Jill Marshall, who posted that message, Morine’s Victory is happily living at Blue Ridge Lane farm in Culpeper, Virginia, about an hour southwest of Washington, D.C., solidly in the horse country of Virginia. “We’ve got a 1700 acre farm,” Marshall told me. “The local hunts go right across our farm, which adjoins 4,000 acres of private land and preserve. We can ride on hunt fields, we’ve got creeks and cows. It’s where we retrain horses off the track, because if they run off, they can just keep going.”

Marshall has been around horses all her life, living at various times in Maine, Florida, and Saratoga; she moved to Virginia to get away from those upstate New York winters. After six years running a horse transport business with her family, she gave it up to concentrate on her farm, where she gives riding lessons, leads trail rides, and retrains horses for second careers.

As we spoke on the phone, she told me that she was sitting on her porch on a gorgeous Virginia evening, watching Morine’s Victory in his paddock. Blue Ridge Lane is a private farm at which 14 horses live; it’s not an official, registered horse rescue charity, though Marshall is working now to establish one.

“I’m in the process of becoming a non-profit,” she explained. “There’s nothing in Virginia, nothing, even though Secretariat was born here. All my fox hunting friends want Thoroughbreds: they don’t want crosses, they don’t want warmbloods. Retired Thoroughbreds are such an amazing commodity; I retrain them when I rescue them and re-home them to students who take lessons here. Seven of the horses that I give trail rides on are off-track Thoroughbreds. Anybody could ride them.”

Morine’s Victory arrived at Blue Ridge Lane on Easter Sunday. Marshall saw him advertised on an auction site, and without seeing him in person, determined to bring him to her farm. “Someone had posted on Facebook about him,” she said. “He was in a kill pen for $300. I needed another horse like I need a hole in the head, but as soon as I saw him, I knew I was getting him.

“I had no idea who he was; when he got here, I looked up his tattoo on Equineline, and I realized that he was a hell of a racehorse. For a horse to win $100,000 and last for three racing years is pretty incredible. What Morine’s Victory did is amazing.” 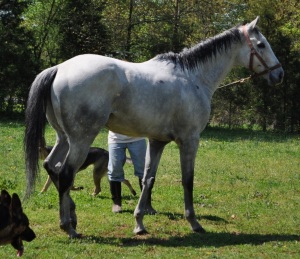 “He is the sweetest ham,” Marshall gushed. “He loves people to death, he loves having his chest scratched. When I whistle, he comes trotting up, as off as he is.”

According to Marshall, Morine’s Victory is sound in three legs, with one gimpy ankle; the vet’s coming next week to do X-rays and find out what’s wrong. She’s prepared to pay what she needs to, even if the horse requires surgery.

“He is so happy to be out here,” she said. “At first, out in the field, he didn’t know what to do. But he’s out there with one of our ancient Thoroughbreds, and he just gets along with everyone, both horses and humans. He’ll never leave here. He’s too great.”

She’s trying to figure out what he likes to be called, what his barn name is; she’s already figured out his treat preferences. “He won’t eat apples, only carrots and peppermints,” she observed. “He loves our dogs, and he has his own bail of timothy in the paddock.”

Pollock, who first inquired about Morine’s Victory, was understandably and predictably horrified when she heard about his escape from the slaughterhouse.

“This is why I stopped going to the track three years ago, and why I no longer follow the Triple Crown campaign or the Breeder’s Cup,” she wrote. “I just follow my few ‘old timers’ until their retirement (or worse). When they finish their careers, I will no longer have any connection to the sport other than to continue my financial support of Equine Advocates and Old Friends at Cabin Creek.

“Until the issue of racehorse retirement is addressed seriously and humanely, the ‘sport’ will continue to lose support. The fact that a gallant little former stakes winner like Morine’s Victory can be tossed away like a piece of garbage is testament to the inhumanity of horseracing.”

Though they’ve never met, have never spoken, she and Marshall share a similar view. “Rescuing horses has been my whole life’s mission,” she said. “I’m a little person; I don’t come from money. This horse, Morine’s Victory, deserves to have people open their eyes.”