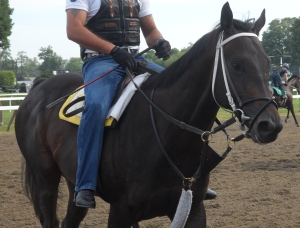 Being Brendan Shanahan is a pretty good deal.  In a 20-year playing career, he won three Stanley Cups and two gold medals with Team Canada, along with a Canada Cup championship. When he retired in 2008, he led the NHL among active goal scorers. Upon retirement, “Shanny” took an executive position with the league, serving as the vice president of hockey and business operations.

Towards the end of his career, he played for the Rangers for two seasons, quickly becoming a fan favorite for his leadership on and off the ice. While playing for the team might not have contributed much to burnish his hockey legacy, it did bring him a Thoroughbred racehorse namesake.

B Shanny is a two-year-old Street Cry colt, out of the Dixie Union mare Nothing But Fun.  His dam won the Cotillion and was second in the Ballerina and the Ogden Phipps; his sire won the 2000 Guineas, the Dubai World Cup, and the Stephen Foster. He was second in the Whitney.

B Shanny’s owner is Barry Schwartz, former chairman of the New York Racing Association board and a lifelong Rangers’ fan; Schwartz also owned a horse named Henrik (for the Rangers’ goalie) and is a partner in Sean Avery, recent winner of the Grade 1 Vanderbilt. He was Saratoga’s leading owner in 1998. He took his wife Sheryl to a harness track for their first date; after they were married, they went to the Garden every Wednesday and Saturday night.

Schwartz thinks his colt is the “real deal.” Sitting in his box in the Saratoga clubhouse, he said, “I thought he was good enough, that if we could break his maiden early enough, he’d have a shot in the Hopeful.”

The public shared Schwartz’s view of the dark bay/brown colt when he made his racing début on July 14 as the odds-on favorite. Racing greenly, he finished second by three-quarters of a length.

Trainer Mike Hushion knew he had a project on his hands when B Shanny arrived at his Belmont barn.

“The day he came in, he was doing nothing but screaming and being studdish, and that’s when I sent the note to Michael Ferdman.”

Ferdman is Schwartz’s son-in-law and a friend of Shanahan’s, responsible for introducing Schwarz and Shanahan, and ultimately for the colt’s name.

“I sent him a note,” said Hushion, “and said that all B Shanny wants to do is fight and chase the girls.” 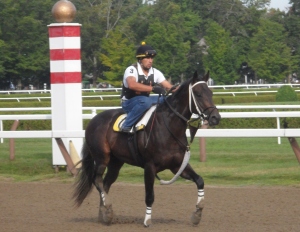 B Shanny and Juan Vasquez

Within minutes, according to Hushion, a reply came in, not from Ferdman, but from Shanahan.  Said Hushion, “He said, ‘That note closely resembles a note sent to my parents from my first grade teacher.’”

Shanahan was on hand for B Shanny’s first race, and was, said Hushion, amused at his namesake’s studdishness.

“B Shanny was just non-stop in the paddock,” said Hushion. “Shanahan thought it was funniest thing in the world.”

Said Shanahan via e-mail, “I think most of the people around the paddock would agree that B. Shanny and I displayed similar nerves and excitement.”

Shanahan’s no stranger to racing; as a teenager, he’d occasionally go to Woodbine in Toronto, and in 2007, Ferdman and Schwartz introduced him to Belmont Park.  If his schedule permits, he’ll come to Saratoga for B Shanny’s race.

Earlier this week, I went to visit B Shanny. Hushion had said that I was welcome to stop by “without any perfume on,” and I expected to see the energetic, unpredictable horse about whom I’d heard so much.

It was shortly after 6 a.m., and up and down the shedrow, horses were throwing their heads, calling to each other, munching on hay.

B Shanny never moved a muscle. When I left half an hour later, he was still sound asleep.

B Shanny is in a lot deeper this weekend than he was in that first race at Belmont: his morning line odds are 15-1, and he’s racing against colts by Invasor, Sun King, A.P. Indy, and Tiznow.

If he’s anything like his namesake, he sure is. 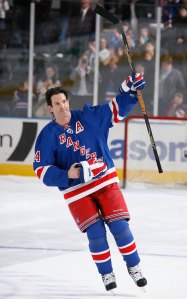 Brendan Shanahan photo copyright and used with permission of the NHL.  All other photos/text copyright Teresa Genaro/Brooklyn Backstretch. Please don’t re-post any photographs or posts in full without permission, which I will nearly always give.

5 thoughts on “Being Shanny”