Though the Woodward has been run at Saratoga only since 2006, Mr. William Woodward was no stranger to the old Spa.

Owner and breeder extraordinaire from his Maryland farm, Woodward was a New Yorker: he was born in New York City in 1876, and he died there in 1953. His horses won five Belmont Stakes.

His eponymous race got its start at Belmont Park and was eight times run at Aqueduct. It’s now a Saratoga fixture, and it was at Saratoga that he saw some of his greatest triumphs, including a win in the 1940 Travers that inspired paroxysms of praise from turf writer John Hervey.

In Legacies of the Turf, racing historian Edward L. Bowen quotes from one of Woodward’s memoirs:

I think [wrote Woodward] my love of Thoroughbred horses and racing came to me first about 1887, when I was 11 years old. In those days, my father used to take me every Decoration Day, May 30, to Jerome Park, which was about nine miles from our house in 51st Street, New York City. …The first race that I really remember was the Belmont Stakes of 1888…I remember the colors and the whole scene. It was run in glorious sunshine.

But it would be decades before Woodward would be fully immersed in racing; in 1910, he inherited the historic Belair Stud in Maryland from his uncle, and he would develop it into one of this country’s premier racing and breeding operations.

Two of those stakes wins came in the Travers:  in 1936 with Granville and in 1940 with Fenelon. It is the latter’s victory that inspired Hervey.

George Widener’s Your Chance was the favorite in the Travers that year. Samuel Riddle’s The Finest set the pace, with Fenelon sitting patiently back, allowing The Finest to take the lead.

Hervey will take it from here:

[Fenelon], however, continued to indulge The Finest with [the lead] all around the upper turn and almost until they rounded into the stretch, when he assumed command, but by a head only…

With the two [Fenelon and Your Chance] yoked in a furious struggle through the final furlong, the stand rose at them, the backers of the two contenders encouraging them with shouts and cries….So they swayed like two gladiators locked in mortal combat, giving their last atom of speed and power and gameness in the attempt to conquer.

Only the camera could decide which ad won. The plate, when developed, showed the nose of Fenelon extended a few inches before that of Your Chance…

Another of the many favorites for the famous stake had, in conformance with its traditions, gone down to defeat—but gloriously as ever did a beaten horse. 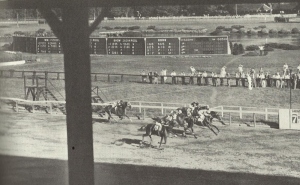 Such an ordeal leaves a colt empty of everything but the will to win that is the birthright of the Thoroughbred, and Fenelon was given two weeks to rest out of it and get ready for the Saratoga Cup…

After that effort, two weeks off. Lightweight.

The year before, Time had done a cover story on Woodward, extolling the virtues of Saratoga and setting the profile of Woodward at the yearling sales, calling him “the decade’s most successful breeder.”  The author quipped, “As it does with no other United States racehorse man, raising comes before racing with William Woodward.”

According to Time, Woodward so loved his horses that he commissioned paintings of the good ones, then made prints to give as Christmas presents. And despite his vast wealth, accumulated through his career in banking, he was said to be unostentatious.

…there is no swish to WW. He owns no marble palace, no yacht, no private railroad car. He has four homes…but none of them is pretentious.

That is, perhaps, a matter of opinion. Last fall I visited Belair Stud, or what’s left of it, including the mansion in which Woodward lived. Pretentious? Perhaps not. Some swish? Perhaps.

Little remains of the storied farm that dates to the 18th century. Visitors can walk through the barn, see memorabilia, and lose oneself for hours among photographs and old racing books and magazines in a marvelously dusty little library and museum.

There is much more to Woodward’s story than I tell here. He was president of the Jockey Club for 20 years, and the details of his life as a breeder could fill a book. This is only a tiny piece, even, of his accomplishments at Saratoga.

Racing purists (among whom I occasionally count myself) are not all enthusiastic about the Woodward’s moving from Belmont to Saratoga. I have to think, though, that Mr. Woodward would approve, and find himself right at home. 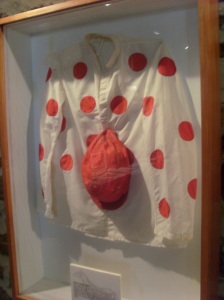 My Gallant Fox profile from the 2010 Belmont Stakes program.

15 thoughts on “Mr. Woodward at the Spa”