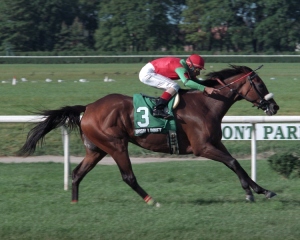 So was Irish Linnet described during her six-year racing career, a career that saw her win at Saratoga for six consecutive years, including five straight wins in the Yaddo.

She won her first race at Saratoga as a two-year-old in 1990. It was the third start of her career, and her first win. Nobody who watched her that July day could possibly have considered that she would go on to do what no filly or mare had done before, or has done since.

Trained by Leo O’Brien, Irish Linnet was three years behind her famous stablemate. Like her, Fourstardave had won at Saratoga in his third start; that was in 1987, and it was a stakes race. She had a little catching up to do: it took her until her second season at Saratoga, in 1991, to win her first Saratoga stakes race, and it happened in the Yaddo, on August 23.

Fourstardave famously won a race at Saratoga for eight consecutive years, 1987 – 1994. Irish Linnet began her streak three years later and carried it on for one more year, winning at Saratoga from 1990 – 1995. Both horses were retired after that year; it was the first time in his nine-year career that Fourstardave didn’t win at the Spa.

Irish Linnet was owned and bred by Austin Delaney, an Irish immigrant who was a New York restaurant owner; she was out of the Irish-bred mare Royal Slip and by Seattle Song.  Delaney also bred Irish Actress, also by Seattle Song and out of Dianette. Both horses were trained by Leo O’Brien, and in 1991, the 3-year-old Irish Linnet won one division of the Yaddo; the 4-year-old Irish Actress won the other.

And Irish Linnet just got better as she got older. At six, she won the Yaddo and the Grade 3 Noble Damsel (being run at Belmont this Sunday); at seven, she got her fifth Yaddo win and second in the Noble Damsel, and she added the Grade 2 New York Handicap – her first Grade 2 win.

In a 1994 article in the Albany Times Union, trainer Leo O’Brien called Irish Linnet “the new Fourstardave” in talking about his two Saratoga-lovers, whose streaks were both going strong at that time.

“They’re a couple of doors away,” trainer Leo O’Brien said. “Maybe they talk to each other.”

With two “Horses for Courses,” O’Brien is really enjoying himself at Saratoga.

“I wish the Saratoga meet would go on forever,” he said, adding, “maybe it will someday.”

In 1995, when Irish Linnet won the Yaddo for the fifth time, Bill Finley in the Daily News called her the “Sultana of Saratoga,” playing on Fourstardave’s nickname, the Sultan of Saratoga. Said O’Brien of the milestone,

“This is important because it will be a long, long time before any filly could win this race five straight years…I’m proud of her because she started this when she was a 3-year-old, and that’s not an easy thing to do.

“As well as she’s running, maybe we will go for six in a row in this race…many of my horses get better with age, and she’s just been tremendous.”

She went on to a career as a broodmare, selling for $500,000 to Ironwood Farm in the November 1996 Keeneland breeding stock sale, in foal to Rahy; ten years later, Bluegrass Thoroughbred Services bought her in the Fasig-Tipton fall mixed sale for $40,000. Said Liberation Farm’s Rob Whiteley, who purchased her with Bluegrass Thoroughbred Service, “I was struck by her class and elegance when I first spotted her at Keeneland. Despite her age, her loveliness was almost overwhelming.”

She’s been bred to some big-name stallions, Giant’s Causeway, and Saint Ballado among them; her most successful foal was her first, Blushing Irish (Rahy), with earnings of $133,136 from three wins in 19 starts.

Her 2008 Artie Schiller colt, Irish Art, made his first three starts this summer, breaking his maiden in his third try, on September 2 at Del Mar. Her 2009 bay colt by Spring At Last is hip 2691 in the current Keeneland sale, and according to John Stuart of Bluegrass Thoroughbred Services, Irish Linnet is now retired. “A wonderful, big mare,” he called her.

In addition to living on through her offspring, the 23-year-old Irish Linnet also lived on this year in not one but two stakes races on the NYRA circuit, one at Belmont in April, one in July at Saratoga. And in the tradition of the mare who like to win the same race more than once, both 2011 Irish Linnets were won by John Terranova’s Chorus Music, news that made it across the Atlantic to Irish Central (who doesn’t quite get the family connection between Irish Linnet and Irish Actress).

While Irish Linnet regularly got her picture taken for wins in other races, there was something uncanny about her ability to win the Yaddo. No other filly or mare is thought to have won the same race five years in a row; only one male, Kelso, did it, winning the Jockey Club Gold Cup from 1960 to 1964.  Though she was named for Ireland, Irish Linnet was a New Yorker through and through: a New York-bred horse who made her mark in a New York-bred race, doing in New York what no filly or mare will do again.

Photo credit to Bob Coglianese, with many thanks to NYRA for providing these two shots of Irish Linnet. Please don’t re-post them without their permission.

12 thoughts on ““The female Fourstardave””