At a family event last week, my brother asked me which races I’d be covering at the Breeders’ Cup this year. Small stories on a bunch of races, I said, and big ones on the Juvenile Turf and the Juvenile Sprint.

“The Juvenile Sprint?” he said, and smiled, looking at my nephew. “Hey, Christopher, know who Teresa’s going to see next weekend?”

No, the nine-year-old said. 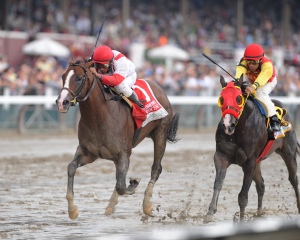 Christopher made Trinniberg’s acquaintance on closing day at Saratoga in the Hopeful, when Trinniberg almost made his day; only three-quarters of Currency Swap’s body prevented Christopher from cashing to the tune of nearly $300 from his $4 win ticket.

Our family’s interest in the two-year-old Trinniberg seems somehow fitting, given that the horse himself is a family affair.

He’s trained by Bisnath Parboo and owned by Bisnath’s son Shivananda; Parboo père told me all of the horses he trains are owned by family members: Shivananda or his brother, or Shivananda’s daughter Sherry.

Trinniberg is by Teuflesberg; he broke his maiden in July by nearly six lengths at Calder, where Parboo is now based after training for years in New York. It was then that the trainer decided to bring him to Saratoga.

“He looked very good, very promising for Saratoga,” said Parboo, who is originally from Trinidad and Tobago.

That promise was at first not in evidence at the Spa, as Trinniberg was trounced by 26 lengths in the Saratoga Special (won by Union Rags, the favorite in Saturday’s Juvenile). But three weeks later, he looked like he was going to pull the upset of the meet before being nailed at the wire by Currency Swap after setting fractions of :21.4 and :45.

Pretty much the same scenario played out a month later at Belmont, when Trinniberg again set the pace, this time in the Grade II Nashua. While Currency Swap was nowhere to be found and Trinniberg’s odds were a measly 4.70-1, the result was the same: Vexor got to him in the stretch, and Trinniberg and the Parboos had to settle for second, by an identical three-quarters of a length.

“He’ll run better this time,” said Bisnath at his Churchill barn Thursday morning. He smiled. “In my opinion.”

As a result of these two losses, the trainer has changed the colt’s morning routine, taking him to the track with a pony and working him in company.  “Sometimes we make the other horse a target,” said Bisnath, “and sometimes we teach him to go to the front.”

He’s leaving Friday afternoon’s strategy in the hands of jockey Cornelio Velasquez, who’s been aboard for the horse’s last three starts.  “What he’ll do all depends on the jockey,” said Bisnath. “Cornelio knows him very well, so whatever he thinks is best, go to the front or sit off the pace, he will do it.”

“He’s a very, very nice horse,” said Shivananda. “He’s a little bit nervous, but going out with the pony every day has made a big difference.”

This “very nice” horse came to the Parboo family almost by accident. Shivananda tells a story of the horse’s purchase that almost defies credulity.  “It was a trip,” he admitted.

“One of the grooms, Julio Tapahuasco, and I went to buy supplies in Ocala. I didn’t even know there was a sale, and I didn’t intend to buy a horse. I didn’t have a check or anything with me.

“But we went in and we looked, and as we were walking out the door, I looked back at the ring. I didn’t know the horse’s pedigree, I didn’t know what he looked like up close, I didn’t know if he breezed. I just looked him and I liked his back-end shape, and I said, ‘I’m going to buy that horse,’ and I started bidding. 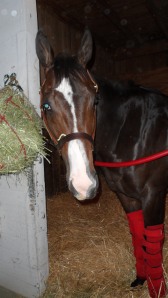 Trinniberg joins Giant Ryan, winner of the Grade 1 Vosburgh at Belmont last month, as the Parboo family’s first Breeders’ Cup starters. To say that they’re excited is something of an understatement.

“All my family’s coming,” said Shivananda.  “They’re coming from New Jersey, from New York, from Florida.  We don’t have enough seats. I had to tell some of them they can’t come.”

While Shivananda is allowing himself some tentative Derby dreams, he’s also thinking realistically.  “We wouldn’t have run him here,” he said, “without this Juvenile Sprint race. I wasn’t going in a mile and a sixteenth in the Juvenile. He’s not ready for that.

“We gotta see how he can work this race. This is the main race where he’s going to tell us if he can really step up.”

Win or lose, Trinniberg’s next steps are set. He’ll take a few months off and come back at Gulfstream in the new year, and his next race, said Shivananda, “will definitely be longer.”

“Hopefully,” he said, “he can bring us back here for the Kentucky Derby.  That would be another dream.”

For now, though, Bisnath is thinking about today.

2 thoughts on “The Tale of Trinniberg”