While I love Belmont, I’m always happy to get back to Aqueduct:  I can’t beat the convenience; the races end earlier; I can sleep a little later. Belmont has myriad benefits, but Aqueduct has its advantages, too.

And this year, the return to Aqueduct contained a not insignificant extra frisson: what would the place be like, now that the casino is open?

It would take me a lot to longer to find out that I initially thought, as my beloved A train let me down: I waited nearly an hour for a Far Rockaway train, which is unheard of, arriving at Aqueduct much later than intended.

The changes were immediately noticeable: the clubhouse entrance to Aqueduct has been renovated, and just beyond, Resorts World New York City rises in glory, dwarfing the little racing plant in both aesthetic and size. 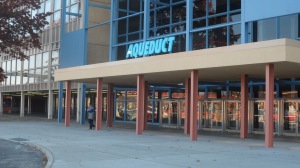 Unlike last weekend, the passage from the Aqueduct’s main floor into the casino was open; it was closed last weekend reportedly for crowd control. So many people came to the casino on opening weekend that Genting had to limit the number of people coming in the main entrance and didn’t want people sneaking in through the racing side.

At noon on Saturday, crowd control wasn’t a problem. I’d heard about people waiting in line to use the machines, but there were plenty of empty seats on a beautiful afternoon, even as people steadily streamed in through the ornate entrance.

I’ve been in maybe two casinos in my life, so I’m not expert on their décor. This one is ornate, a little garish, but with areas that look pretty pleasant to hang out, if it weren’t for the flashing lights and constant beeping from the machines.

No televisions were carrying the NYRA channel (to be fair, the races hadn’t yet begun), but the glass wall and terrace along the apron are a welcome acknowledgement to the racing side, and the Aqueduct Buffet offers a nod to the horses.

The food options are varied and reasonably priced, from hamburgers to Chinese to a buffet, and the Cobb salad I got from one of the “grab and go” stations was more than satisfactory…though “grab and go” turned into “grab and wait,” as it took almost 10 minutes in line to pay for it. The place is not without its growing pains.

The Man o’War Room on the second floor of the clubhouse is the same, though the deli there now features pre-made sandwiches instead of those made to order; the tables in the Manhattan Terrace have been removed and replaced with simulcasting carrels, and the bar is gone, waiting, apparently, for a liquor license, as Genting has taken over all the concessions on the racing side.

The Aqueduct subway station is closed, scheduled to re-open shortly, so for now, those who get to Aqueduct need to make their way down to the North Conduit station at the far end of the parking lot towards JFK airport. I’d been told that Genting was running a regular shuttle, and after filing my story at about 5 pm on Saturday night, I ventured forth.

The shuttles accommodate 20 people at a time, and they fill up quickly, so I had to wait for the second shuttle that came around, which took about 15 minutes. It stopped first at a bus stop in the parking lot, then made a loop around the parking lot for no apparent reason, went back to the bus stop, and then headed for the subway, dropping us off at the station at which Aqueduct-bound trains stop…but not at the one at which Brooklyn/Manhattan-bound trains stop.

To get to that one, we had an additional five minute walk, which in and of itself is no problem, but it’s along a poorly maintained, dimly lit walk that wends through a small wooded area. I’m fairly intrepid, but this is not a walk that I’d like to take by myself when it’s dark out, and it’s a disaster for those with any kind of physical impairment.

The subway stop is about half a mile from the track, and it took me 45 minutes to get there. I’ll be walking next time, or perhaps driving until the Aqueduct stop re-opens.

It’s both good news and bad news that if you’re not interested in the casino, going to Aqueduct is the same as it ever was: good news because the casino doesn’t really infringe on the racing side, and bad news because, well, if you were expecting big changes at the Big A, you won’t find them, which is, sort of, a comfort.

After a decade of delay, there was something kind of awesome about seeing the pleasure palace up and running, about seeing it become a reality, about imagining what it might do for New York racing this winter and beyond. At the same time…Aqueduct Racetrack has been around since 1894. The history of racing has been written there, and while its best days as a premier racing venue are behind it, its significance to the sport can’t be underestimated.

I’m glad that the casino and the track are run by separate entities, glad that racing people are still in charge at Aqueduct, glad that people with a commitment to New York racing are overseeing the track. I’ll be hopeful that racing in our state will thrive and that our racetracks will be improved and that the people who commit themselves to racing at all levels can earn a better living.

But first, I’ll hope that they get the damned subway platform open…and soon.

12 thoughts on “Maiden Voyage to the new Big A”