A racing refrain this year is that 2011 has been somewhat lackluster. No big emerging star, no clear choice in many Eclipse categories, few breathtaking performances.

For many of us, though, the transcendent times in racing come on small stages, in quiet moments; memories are made when we don’t expect them to be, and not when the whole world (such as it is, when it comes to racing) is watching.

Here are my 2011 memorable moments, the joyful, the exhilarating, the sad, the highly personal, on the track and off, with photos and videos and links where appropriate, presented in largely chronological order:

Learning last February that I’d been invited to join the voting committee for the Hall of Fame was among the most humbling and exciting things that’s happened to me since I started writing about racing. An honor on its own, it was made all the more meaningful by my family’s erstwhile connection to the Museum.

Bad news came later that month when we learned that Giant Moon had died unexpectedly from laminitis during a winter freshening at the farm. He was always fun to watch on the track, always game, and a favorite to visit on the backstretch. What a blow to his connections, who adored him. 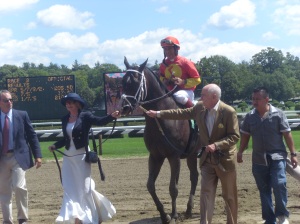 Last March I wrote about Tom Fool, trained by Hall of Famer John Gaver; what a treat it was when his grandson left a comment. Gaver III is a trainer himself, and someone that I am now pleased to call a friend. Racing history is indeed alive and well and in good hands.

A few weeks later, I was wandering a Gulfstream shedrow one Sunday morning when I came across an imposing, genial, and curious face. Later than afternoon, he nearly stole the Florida Derby, settling instead for second before going on to win the Preakness.  Watching Shackleford show up on every big race day was one of the joys of 2011.

Anyone who reads here regularly knows that I think that the Kentucky Derby is pretty much an over-hyped affair that gets way too much significance given its results; nonetheless, it was pretty cool to attend my first one.  And while Uncle Mo dominated the pre-race narrative, it was his jockey, John Velazquez, who got to carry the blanket of roses a day after learning that his scheduled mount would be scratched. That’s the Derby story I’ll remember.

My attachment to Winter Memories began last year, in the Miss Grillo at Belmont, October 2010, but she dominated my racing life in 2011, getting to the winner’s circle in four of six starts, most memorably in the Garden City in September. Talking to her connections – owner/breeder John Phillips of Darby Dan and Phillips Racing, trainer Jimmy Toner – was always an unqualified pleasure, as was recognizing her pedigree, going back five generations in the Darby Dan family.

Her breathtaking – literally, for me – win in the Garden City is one of five races on which you can vote for NYRA Race of the Year.

Last summer, the Saratogian asked me to write profiles of the three Hall of Fame inductees elected by the Historic Review Committee: trainer Matthew Byrnes, horse Duke of Magenta, and jockey Shelby “Pike” Barnes. I became so fascinated with Barnes’ life that I continued my research for a feature in the Travers Stakes program; Barnes won the 1889 Travers on Long Dance. Seldom have I been more absorbed in researching and writing; Barnes’ story is fascinating.

A year ago this time, I knew almost nothing about Lasix. Feeling that that was something of an irresponsible position, I attended every racing meeting on the topic I could, including a full-day “summit” at Belmont. I learned a lot, but feel no closer to developing a strong opinion on the matter than I did a year ago.

It’s Tricky, Turbulent Descent, and Ask the Moon made racing memories for me this year. It’s Tricky made eight starts, finishing first four times and second three times, beaten twice by Royal Delta and once by Plum Pretty. She has a quirky personality that her trainer, Kiaran McLaughlin, made the most of, one that kept her in his barn even when she raced in Godolphin blue.

I met Turbulent Descent through some of her owners, who contacted me last spring to ask advice about Belmont. We’ve become friends and I’ve gotten to follow this filly and them through much of the year. In six starts this year she’s got three wins (two Grade 1’s) and two seconds, faltering in the sandy Belmont slop in the Acorn and the Breeders’ Cup Filly and Mare Sprint. Her Test was one of the highlights of Saratoga, and she’ll close out 2011 in the La Brea on Saturday.

Ask the Moon became a Saratoga star at age six. Before the Grade 1 Ruffian on July 31, she’d made 30 starts with eight wins, none of them in graded stakes. In the paddock at Saratoga she looked outstanding, which I noted to a friend…watching her cruise down the stretch to win by more than five lengths at 18-1, I rued not backing up that opinion with a wager. On closing weekend, Ask the Moon came back to win the Grade 1 Personal Ensign by nearly three. Her only two starts at Saratoga, her only two graded stakes wins, both Grade 1’s.

A more modest filly made memories at Saratoga, too, when Precious Soul, a half-sister to Saratoga standout Society Selection, won an allowance race for the same connections as her more famous sibling, owner Irving M. Cowan and trainer Allen Jerkens. She’s not in the same class as Society Selection, but seeing those silks and those faces in the Saratoga winner’s circle was something special. 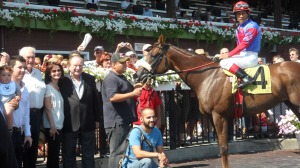 If you love Saratoga history, you thrilled when The Spa: Saratoga’s Legendary Race Course came out last summer. Paul Roberts and Isabelle Taylor’s detailed and accessible history of the architecture at the track was as absorbing as any racing book I’ve read, and it’s essential reading for anyone who loves Saratoga.

The Spa meet kicked off with an impressive filly breaking her maiden, and before the week was out, two new Saratoga stars had made their names in print and on television. My Miss Aurelia got the first of her four wins in an undefeated 2011 when she won a maiden race on July 22; that afternoon, Lucky the kitten made her Saratoga début, too, in My Miss Aurelia’s barn. Both of them would go on to much greater fame before the year was out.

Hockey and horse racing intersected at Saratoga when Sean Avery won the Grade 1 Vanderbilt in early August; a few weeks later, B Shanny broke his maiden in his second start. Neither horse has raced since, both sidelined due to injury, but let’s hope we get to see them again before the current hockey season comes to an end.

The final highlight of the Saratoga meet was hometown favorite Teresa Pompay getting her first Grade 1 win in the Hopeful with Currency Swap. He raced only twice in 2011, both at Saratoga, both wins; Breeders’ Cup hopes were dashed when a minor injury put him on the sidelines until 2012. The Hopeful was not the prettiest of races, especially for nephew Backstretch, who had Trinniberg at 68-1, but I’m looking forward to Currency Swap’s return.

Back at Belmont, Showcase Day presented a parade of Backstretch favorites in the winner’s circle. Standing in the paddock before the Hudson, in a sort of Ruffian Handicap/déjà vu moment, I said, “Doesn’t General Maximus look awesome?” And in double déjà vu, I watched him sail to the finish line, unencumbered by a dime of my money. Unfortunately, General Maximus is on the list of sad memories, too, as he broke down fatally in his next start.

David Donk’s Hessonite had quite a year, making six starts and ending with a record of 4-1-1-, including a win over colts in a New York Stallion Series race at Saratoga. She ended her season with a win in the Ticonderoga and is off on the farm for the winter. We’ll see her in 2012.

And capping Showcase Day was the return of Haynesfield to the winner’s circle when he repeated his 2009 win in the Empire Classic. Between those two victories he’d won the Discovery, the Suburban, and the Jockey Club Gold Cup; he retired last month and will stand at Airdrie in Kentucky. 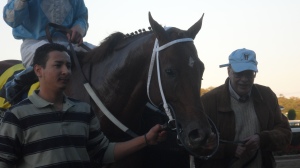 And yes, I even have a memorable moment from the Breeders’ Cup, but this one is surely not going to make anyone else’s end-of-year lists.  I have a soft spot for the offspring of Afleet Alex, so despite evidence that often suggests that my money would be better invested elsewhere, I bet his progeny almost automatically. On April 24 of 2010, I was standing in the winner’s circle at Aqueduct, bemoaning the lack of internet access as I tried frantically to bet $2 to win on 24-1 Afleet Again in the Withers. A friend standing nearby said, “You’ll be glad when the race is over that you didn’t get service.”

A minute or two later, as Afleet Again gained steadily in the stretch and won by a length and a half, he looked at me. “Did you get the bet in?”

At Churchill Downs on November 5, with about a minute to post before the third race, the Breeders’ Cup Marathon, I glanced at the tote board. Afleet Again, winless since that Withers eighteen months previous, was 41-1. I hesitated. “If he wins,” I thought, “at that price, and I don’t even have $2 on him…”

A couple of minutes later (it took longer this time – it was, after all, the Marathon), my cell phone vibrated with a text. It was from that Aqueduct friend. “Tell me you bet him,” it read.

Wins and losses, triumph and sadness…racing 2011 is nearly at an end. We’ve got three days left to make racing memories, and then we turn the page of whatever racing-related calendar that we’ll pick up on New Year’s Day or that we got for Christmas…and we get to start all over again. We are lucky indeed.

5 thoughts on “My Year in Racing”