During the last week of April in 1994, turf writers were looking ahead to the Kentucky Derby while hockey writers were following the first round of the Stanley Cup playoffs. On the April 16, the Wood Memorial had been won by the Steven Young-trained Irgun; he beat Go for Gin by a length and a half, but by the time those first round playoff series were wrapping up, Irgun had been sidelined by a sore right foot. He wouldn’t race again for two years, returning on April 3, 1996 at Santa Anita, finishing fifth and never racing again.

In 1994, the Times still covered local stakes races.  Joseph Durso wrote about  the Excelsior on April 23, when Colonial Affair returned to the winner’s circle for the first time since the previous June, when he’d won the Belmont Stakes. Jose Santos rode him in the Excelsior, but his jockey for that Belmont, Julie Krone, was also in the news in late April, 1994.

Out of racing since a terrible spill at Saratoga the previous summer, Krone was returning to the track; the Times reported that on an April morning, she came to Belmont to exercise two “easy horses,” Uncharted Waters and Vel Vel, for Scotty Schulhofer. “I feel,” she was quoted as saying, “a little bit cocky already.”

On the Derby trail, Durso was writing about Garrett Gomez, who over the weekend had ridden Southern Rhythm (trained by James Keefer) to victory in the Lexington a day after he had won the Arkansas Derby with Richard Small’s Concern.  Also in Lexington, Holy Bull worked five furlongs at Keeneland in 1:02 ½.

Back home at Aqueduct, Minetonightsfirst (a “strange name,” said Durso) won the filly division of the New York Stallion Series with Gash taking the colt’s division. The filly was ridden by Robbie Davis and trained by Dennis Manning; Davis also rode Gash, who was trained by Mary Eppler and owned by Alfred G. Vanderbilt

And on April 25, the Rangers completed a first-round sweep of the hated Islanders in a series that left Rangers’ fans exulting and taunting. Beating the Islanders 6-0 in each of the first two games of the series, the Rangers crushed their eastern neighbors, moving on to face the Washington Capitals.

The win, said Robin Finn, was “embarrassing for [the Islanders] and ennobling for their metropolitan rivals.”

Should the Rangers emerge victorious tonight, no one will call the win “ennobling” for the home team. These Rangers do bear some similarity to that 1994 team, both having dominated through the regular season, both having a seemingly invincible goalie. But this team is more vulnerable and less experienced than that team, and in this series, that’s been evident. This series shouldn’t have gone seven, but it has, and here we are.

1994 was the last time that the Rangers played a game 7, and they played two. The first one came at the end of May, against their rival to the west, the New Jersey Devils; they played their second game 7 of the tournament on June 14, 1994. Both came on the Garden ice.

The horse that finished second in the Wood Memorial that year, Go for Gin, vindicated himself with a win on May 7, 1994, and later that summer, hockey and horse racing came together on the Belmont backstretch. 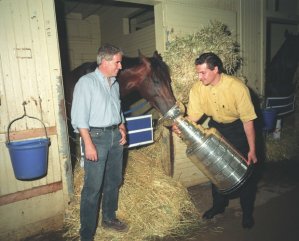 The first round in 1994 was easy; this year, not so much. Tonight, the Rangers play game 7 for the first time in 18 years, and I break my game 7 maiden at the Garden. Once more, all together…