Last night on Twitter and Facebook, several people reported that, according to the New York State Racing and Wagering Board’s Equine Breakdown, Death, Injury and Incident Database, Giant Ryan, injured in Saturday’s True North at Belmont, had been euthanized.

The database offers visitors the chance to view two lists: equine deaths or all types of incidents; wondering whether Giant Ryan might appear on the “all incidents” list, I checked that database and found that he did not, but that among the other listings were incidents for two harness horses, one taking place on July 16, 2012 and one on August 21, 2012.

I contacted the State Racing and Wagering right away about these listings and the Giant Ryan item – this was at about 8 pm last night–and to my surprise, I heard back from a spokesman immediately, who confirmed that the Giant Ryan listing was “inadvertent” and would be corrected “ASAP,” with a correct listing for Giant Ryan as injured to go up today. Within minutes, all three items had been removed from the database. 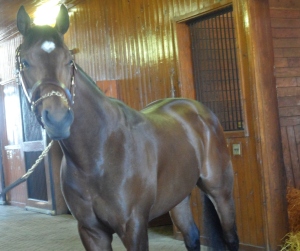 Curious, I began to browse, admittedly briefly, and much to my surprise—my giant surprise, actually—I saw that the Todd Pletcher-trained Giant Surprise, who had been injured at Saratoga last summer, was listed as having been euthanized. This will come no doubt as a (giant) surprise to the people at Vinery New York, where the colt is standing at stud, and where I saw him in January.

The NYSRWB database includes two disclaimers that read, “Note that the above is live data and subject to change as more information becomes available” and “The New York State Racing and Wagering Board takes reasonable measures to ensure that the data and information on this Web site is (sic) accurate and current. However, the Board makes no express or implied warranty regarding this information or data and expressly disclaims all legal liability and responsibility to persons or entities who use or access this Web site and its content.”

Earlier this year, I wrote in support of this database, which for the first time makes easily available to the public information about breakdowns. I still support it, and I am grateful to the RWB for getting back to me so quickly last night, long after business hours. I’ll be speaking later today with someone from the Board about the process for acquiring and publishing information about equine injuries and follow up here.