In March at Gulfstream Park, Allen Jerkens introduced a new filly in his barn. “Emma,” he said. “Emma’s Encore.”

She had arrived over the winter, winless after three starts and not terribly promising.  In her first start for Jerkens on February 2 in a maiden claiming race, she finished third by three lengths. She broke her maiden in her next start, a maiden special weight, and five and a half months later, she’s a Grade 1 winner, victorious in Saturday’s Prioress.

Emma’s Encore (Congrats – French Opera, by Wild Again) was at that point owned solely by Lexington’s Brenda Mercer, and after the dark bay/brown filly broke her maiden, Mercer sold a partnership interest in her to Peter Berglar of Stonereath Stud in Paris, Kentucky.

“The best thing that ever happened,” said Berglar in the winner’s circle Saturday, “was giving her to Allen Jerkens.” 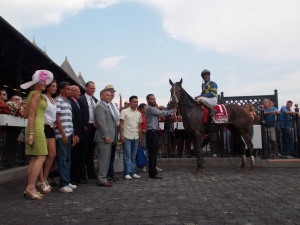 “Out of the blue,” said Jerkens last March, of the call that came from Mercer’s daughter Shelly Ulrich. “I didn’t even know who they were.”

Ulrich had picked out the Florida-bred filly at the Keeneland September sale in 2012. Her Willow Oak Farm focuses on sales and pinhooking, but she had decided she wanted a racehorse.

“I thought it would be fun,” she said by phone from Lexington today.  “She’s the only racehorse we’ve ever had.”

“I really liked her,” Ulrich continued. “Her X-rays weren’t that good; she had some issues, but I still thought that she’d be out of our price range, so we went to leave. And as we were leaving, she went in the ring and got stuck at $1,500, and I said to myself, ‘You know, she’s a really nice filly,’ and I made one bid and that was it.”

The filly’s first three races were on dirt, turf, and Polytrack; she finished fifth, sixth, and eighth.  Discouraged, Mercer and Ulrich brought her home to their farm.

“We didn’t know what to do with her,” Ulrich said. “And we were talking in the barn one day, and the only name that we could get in our head was Allen Jerkens’.

“So I called Gulfstream and I got his phone number and said, ‘I’ve got a filly I need to send to you.’ It was kind of simple,” she said with a laugh.

“It’s a blessing,” she went on. “The good Lord willing, it was just where we needed to send her. He got into her head and figured her out.”

The turnaround wasn’t immediate, but it didn’t take long. “She had bad luck,” Jerkens said of her first start for him, the third in the maiden claimer.  She broke her maiden in her next start, a maiden special weight, and then came the breakthrough, on March 14.

“Julien [Leparoux] rode her and she got whacked leaving the gate,” recalled Jerkens. “Then she was moving up along the inside and got stopped again.

“And then she finally got loose, and after she won, I remember [assistant trainer]Fernando [Abreu] running towards the winner’s circle saying, ‘This is the real deal!’

In seven starts for the Chief, Emma’s  Encore’s record is 4-1-1,  her only dismal performance coming in the 1 1/8 miles Gulfstream Park Oaks; two of her wins are in graded stakes races, the first coming in the Grade 3 Victory Ride last month at Belmont.

“I really wanted this win for Allen and Fernando and the filly,” said Ulrich, adding, “Fernando babies her. Whatever he thinks she needs, he gets.”

His Saratoga fortunes have declined in recent years; his last visit to the winner’s circle for a stakes race here came in 2008, when Any Limit won the Grade 2 Honorable Miss. If things go well, he’ll get another chance to get there this summer with Emma’s Encore.

Neither Ulrich nor Jerkens would say for sure where she will race next, but, said Jerkens, “We’ll nominate her to the Test,” he said, “and if it looks like it’s too soon, we won’t run.”

Then he added, “It’s nice to think about.”

5 thoughts on “Emma’s Encore and the Chief”