As an erstwhile Saratogian, I look forward to the Travers every year, regardless of who’s running.  As a turf writer, I hope that the race will play an important role in the sport’s landscape. As a racing historian, I want the Midsummer Derby to yield something noteworthy that future generations of racing fans might read about. As a racing fan, I just want the day to be fun.

Friday through Sunday, more than 87,000 came to the races here. They saw five Grade I races and a Grade II. They saw Turbulent Descent return to the Spa in victory, making her first start for Todd Pletcher; they saw a $25,000 claimer win a Grade I in his first graded stakes attempt; they saw Zagora set a course record in the Ballston Spa; they saw It’s Tricky fall, literally, to her face, then rally most impressively to finish third in the Personal Ensign, the race in which she was much the best.

Willy Beamin in the King’s Bishop

And, of course, they saw the 143rd Travers Stakes, a race that takes its place in the Spa’s prodigious history. As we know all know, there was only one other dead heat in the Travers, that in 1874, but it wasn’t an official outcome because, as the New York Times tells us, the owners of Atilla and Acrobat decided that they’d make the horses go around again to decide a winner.

The Travers was a 1 ¾ miles in those days, and the horses ran it twice, the second time faster than the first.  Atilla emerged victorious but lame and never raced again; Acrobat would go on to be champion three-year-old male.

I don’t believe that any one racing day or event is necessarily “good for the game” or an indication of the industry’s robustness or fragility.  And while the race raised some not insignificant questions about the way pools are paid out in the event of a dead heat, I would guess that most of the crowd here on Saturday walked away pretty happy about what they’d seen and experienced. I’d guess that they talked about it with their friends, and at work this morning, when the topic of the race came up, they were pretty damn psyched to be able to say, “Yeah, I was there.”

And with due respect to the connections of Alpha and Golden Ticket, who have said all the right, gracious, and sporting things in the last few days but who must be secretly dying inside that they didn’t get the race all to themselves, the dead heat will do whatever little good it will do to get people interested in racing, much more than a victory by any one single horse might have. 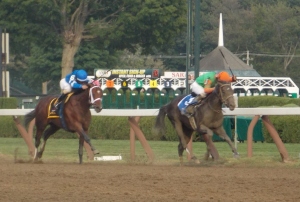 While I’ll never forget that dead heat, it’s also going to be a long time before I forget It’s Tricky in the Personal Ensign.  Hers was, perhaps, the most impressive performance in a weekend full of them.

This morning, she was none the worse for wear, if a bit quieter than her usual imperious self. Suffering only some scrapes as a result of the mishap, she accepted proffered peppermints with a little less disdain than usual, and even permitted a visitor to stroke her beautiful blaze.

I’m not going to book any bets on whether the people here last weekend will come to Belmont to watch It’s Tricky in the Beldame next month, or venture to Parx to see Alpha in the Pennsylvania Derby, or tune in to watch Contested and Turbulent Descent go at it in the Breeders’ Cup Filly and Mare Sprint. I’d like to think, or at least, hope that a few of them will, that some small percentage walked away from this weekend’s races, having watched them in person or on television, wanting to see another horse race, and soon.

I feel lucky to have been here, to have witnessed racing history being made, to have seen remarkable performances by horses with terrific stories.  And the good news is that they happen every day at race tracks around the country. The bad news is that most of the time, no one’s paying attention.

4 thoughts on “Making History at the Spa, Again”