If it weren’t for horse racing, we might not have any hockey at all. 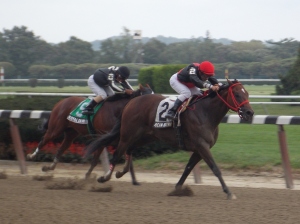 Last Saturday, Sean Avery made a victorious return to the track after an absence of more than a year, winning a stakes race at Belmont; this Saturday, B Shanny will go to the Belmont post at 4:02.

And that night at 11:59 pm, the NHL’s collective bargaining agreement will expire, and with it, hopes for a full 2012-2013 hockey season.

Pro sports labor disputes are tiresome, fans often asked to choose between rich, entitled owners or rich, pampered athletes. Hockey players may be more sympathetic than other athletes, as they are generally fairly humble and their salaries are, relatively speaking, less stratospheric than football, baseball, or basketball players.

So, yeah, I’m siding with the players on this one. I’m not sure that I’ve quite forgiven James Dolan and Madison Square Garden for the last lock-out, the one that wiped out the 2003-2004 season, the one that halved the Rangers’ payroll but had no effect on the cost of my season tickets. From this fan’s limited perspective, all that lock-out did was enable Dolan to make an even bigger profit, because he could no longer pay astronomical fees for free agents that came to New York and promptly forgot all they ever knew about playing hockey.

And let the record show that the last two work stoppages in the NHL were lock-outs by the owners, not strikes by the players, as will be this one, too, if it comes to pass.

So I’ve got my eye on these labor negotiations, mostly through the Twitter timelines of U.S. and Canadian writers, most of which are fairly pessimistic about the season starting on time on October 11.  I’m OK with a little delay; my season ticket prices went up again this year, this time by more than 25%, and maybe if the Garden opens later than usual, the renovations will be completed to the point that I’ll have a bathroom within three city blocks of my seats.

And with horses named for erstwhile Rangers making regular appearance at Belmont, maybe I’ll be able to satisfy, for at least a little, the hockey jones that sets in pretty much the day after the Stanley Cup is won.

B Shanny broke his maiden at Saratoga last summer for owner Barry Schwartz and trainer Mike Hushion, after which he got hurt and was on the shelf for nearly a year, running second in his comeback at Belmont in June and winning again at Saratoga last month. The 3-year-old New York-bred by Street Cry often suffers—if that’s the right word—from a surplus of testosterone before racing (to put it delicately), so there are no guarantees that a pre-race paddock observation this weekend will remain PG-rated.

Sean Avery the horse is not quite as physically hearty as his hockey-playing namesake; plagued by injury, the 6-year-old owned by Black Swan Stable (in which Schwartz is a partner) has had two layoffs of more than a year, coming back last weekend to win the

Affiliate in his first race since his Grade I win in the Vanderbilt at Saratoga in 2011.  Fingers crossed that we’ll see him back here in the Vosburgh on September 29.

Hundreds of NHL players have descended on New York City to participate in the labor negotiations; while I imagine that Saturday will be a day of feverish (and ultimately futile) activity as the deadline approaches, I’d like to think that a few of those guys, many of whom are avowed racing fans, might make the trip out to Belmont, catch a few races, say hi to B Shanny.

Then again, given the role of the real B Shanny…maybe not.

One thought on “Sean Avery and B Shanny: At least there’s hockey at the races”