On the morning of January 11, Gina Rosenthal was in Florida with her children, celebrating her parents’ 50th wedding anniversary. She usually stays close to her Maryland home to monitor her horses, but on this morning, she was waiting for a call from her trainer, John Robb, for an update on a horse.

Robb phoned to say that the horse had worked well…and then the phone rang again.

The horse was Bullet Catcher, now famous for dumping his rider and heading out of Laurel Park and down the busy road. Captured on video by jockey Abel Castellano, Bullet Catcher ran for a little more than a mile and a half before being caught.

“I watched that video once,” said Rosenthal. “I couldn’t watch it again. The anxiety was insane.”

Bullet Catcher became something of a sensation, his journey featured in USA Today, Huffington Post, and Deadspin (and by me at Forbes), the story a good one only because the four-year-gelding came back without injury.

“It’s a miracle that he didn’t slide, fall, or get hit,” said Rosenthal, whose horses race in the name of No Guts No Glory Stable.

And given Bullet Catcher’s lifelong propensity for adventure, he seems to have take his stable name to heart.

“He doesn’t like to be told what to do,” she said. “He’s been like that since day one.”

Even as a weanling, Bullet Catcher found himself with a remarkable ability to find himself in trouble—both inadvertent and of his own making.

Isolated because of a tendency to be “a bit of a bully,” the young Bullet Catcher had a paddock to himself.

But while he had no trouble taking on other equines, he wasn’t quite as successful in fending off Mother Nature.

“We had a huge snow storm, and because he was off by himself, the farm sort of forgot about him,” Rosenthal recounted.  “When they finally got him, he was in two feet of snow. They had to plow him out. They thought he’d be dead, but he was just standing there.”

Rosenthal bought the son of Strong Hope by Polo Ridge (Wild Rush) at the Fasig-Tipton Eastern Fall sale at Timonium for $9,500 in 2010, but days before the sale, the bay yearling offered a foreshadowing of some later behavior.

“He actually cleared the fences of the farm and ran through Chestertown [Maryland],” Rosenthal remembered. “He ran through the city. Four miles into town.”

He made his first start in May of 2011, breaking his maiden impressively, coming from far off the pace, “closing with a flourish” to win by a length and three quarters.

“It sounds nuts, but we thought he was our big-time horse,” said Rosenthal, who grew up in Maryland racing. “We were thinking Preakness. We really, really liked him.” 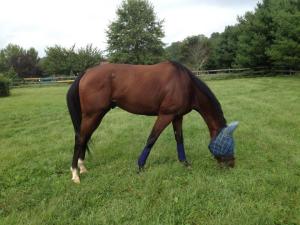 Turned out in the spring. Photo courtesy of Gina Rosenthal and Robin Coblyn

But then began a pattern that would plague Bullet Catcher for the next year and a half.  A series of little injuries—“nothing serious, but stuff that needed to be addressed,” said Rosenthal—would keep him in and out of racing. His past performances are rife with layoff lines.

After a second place finish at Charles Town last July—beaten less than a length—Bullet Catcher was off again, and said Rosenthal, “The first time he went back to the track, he dumped his rider.”

After his Route 1 adventure, his trainer John Robb was hesitant to run him, according to Rosenthal, but he was apparently so full of energy that they shipped back to Charles Town  on January 19 for his first race in six months. After leading for most of the four and a half furlongs, Bullet Catcher got nipped at the wire to be beaten by a head. That was fine with Rosenthal.

“Things could have been horrific,” she said, referring to his escape from Laurel Park. “To see him under tack again gave me goose bumps. I was very proud of what he did, especially after that long layoff.”

Bullet Catcher is entered back at Laurel this Thursday in the eighth race. He’ll be making only his second start in Maryland, and Rosenthal is glad to have him home.

“We’d love to come back to the roots,” she said. “We think he’s a special horse, and we hope that he continues to show us success.”

She continued, “He’s a big kid. There’s not a mean bone in his body. Even with his groom, he constantly nips, but he’s playing. He’s not vicious.”

Then she added, in something of an understatement. “He’s always been a handful. He’s been quite a story.”

For updates and photos on Bullet Catcher, check out his Facebook page.