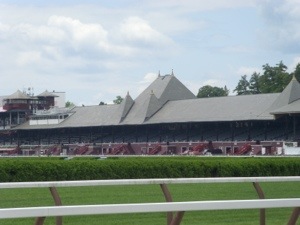 Last March, I was standing at Gulfstream Park watching morning workouts when I got a phone call from a woman named Patricia Lane. She was, she said, producing a documentary on Saratoga for the racing sesquicentennial, and she wondered whether I might be interested in being interviewed for it.

Thrilled and nervous, I sat with Patricia for several hours in April, in the Hall of the Fame at the National Racing Museum, and we talked about Saratoga, from its beginnings until today. I can think of few more pleasant ways to spend an afternoon.

Last Friday, WMHT held a screening of The Track at Saratoga: America’s Grandest Race Course. Featuring commentary from the Museum’s historian Allan Carter; NYRA consultant and racetrack historian Paul Roberts (author of The Spa: Saratoga’s Legendary Race Course and Racecourse Architecture; Samantha Bosshart of the Saratoga Preservation Foundation; and Alfred Vanderbilt, Jr., along with horsemen Todd Pletcher and Bill Mott among others, the film traces the history of Saratoga Race Course and Saratoga itself, against a backdrop of images and video, some familiar, some more obscure.

It feels odd and perhaps even unseemly to write so enthusiastically about a movie in which I play a part, but I’m going to, anyway: I loved this movie. Lane and everyone else involved in the movie have written a love letter to Saratoga, escaping parochialism with the prominent role of Roberts, whose relationship with NYRA is balanced by a broad international and historical perspective on race courses, and who speaks convincingly about the important place that Saratoga Race Course holds. He goes so far as to say that if the world could only have a handful of race courses, Saratoga should be one of them.

The film screens tonight on WMHT in the Capital District at 9 pm, and again on Tuesday, July 30 at 7:30, with additional showings on Friday, August 23, 2013 at 9 pm and Saturday, August 24, 2013 at 10:30 am. Lane said that she expects the film will show on other public television stations throughout the state later in the summer; WMHT executives said that it may be available for purchase later in the year.

Click here for more information about the movie and a short preview.