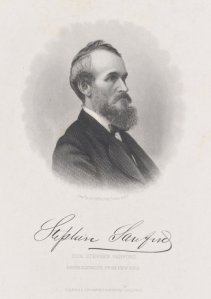 “A fitting tribute to one of the stoutest supporters of the sport New York State has ever known.”

So wrote the Daily Racing Form  about the inaugural Sanford Stakes, named to honor a family from nearby Amsterdam, New York, that began racing its homebred horses at Saratoga in the 1880s. Beginning with General Stephen Sanford and continuing with his son John, the Sanfords were committed to racing at Saratoga–and sometimes only at Saratoga.  In 1901, the family built a private stabling area–that still exists–just off Nelson Avenue, across the street from what we now call Clare Court.

Stephen Sanford died in February 1913; he didn’t live to see Thoroughbred racing return to New York or to his Saratoga following a nearly three-year hiatus because of anti-gambling laws, but as the New York tracks prepared to welcome back racing back to the state, John broke a family tradition in order to support the sport they loved.

Ordinarily, the Sanfords held their two-year-olds until Saratoga, but in 1913, John shipped 22 of them to Belmont to help ensure that racing in New York would have a vibrant re-birth.  It was also announced that in 1913, a stakes race named the Hurricana, for the Sanfords’ Amsterdam farm, would be re-named the Sanford Memorial to honor Stephen.

The first Sanford Memorial was run on August 23, 1913, and the crowd was unusually large, due, said the Saratogian at the time, to the large number of Amsterdam residents who turned out to see the race. The race itself didn’t garner a lot of detailed coverage in any of the usual sources, but the Form noted that Little Nephew, bred by John Madden and owned by M.E. Gruber, won in “easy fashion” over a track slowed by overnight rain. Information on Little Nephew is scant; he won several stakes as a two-year-old, compiling a record of 17 starts, nine wins, five seconds, and two thirds, but before racing at three, he was retired…at least temporarily.

The Daily Racing Form reported in early 1916 that Gruber had sold the horse to Lew Marion and noted that although Little Nephew “has not…shown to the best advantage…he has managed to win.” Entries at Havana continued to show up for Little Nephew until 1921, when he was 10 years old, and a search in the Form archives turns up literally hundreds of mentions of his name. Much of his legacy is shrouded in historical mist, but in the summer of 1913, he was a two-year-old Saratoga star, linking his name with that of the Sanford family.

The Friends of Sanford Stud Farm will gather at the races today, as they do every year; they work tirelessly to save what is left of the farm, and they got several pieces of good news over the last few months when the farm was put on the National and State Registers of Historic Places. Little remains of the Sanford’s racing and breeding establishment, but at least some of it lives on physically, and each year, the Sanford Stakes recalls the family’s contributions to the sport and to Saratoga, contributions noted a century ago, on the first running of the race:

It was the Saratoga track that [Stephen Sanford] chose for his especial support and favor. General Sanford never raced his horses at any of the earlier meetings of the year, but waited until the flat should be up at the Saratoga track. It was here that he built a private park for his Hurricana string, and it was here that some of the greatest victories of the Hurricana Stable were brought to him..

Throughout 2013, Brooklyn Backstretch will re-visit the racing events of 1913, the year that racing returned to New York after a nearly three-year absence; click here for previous stories.

Click here for previous stories on the Sanfords and Hurricana.

Quoted, consulted, and for further reading

“Memory of Late Gen. Stephen Sanford, Friend of Saratoga, Honored at the Meeting Today with First Running of the Sanford Memorial Stake.” The Saratogian, August 23, 1913.

2 thoughts on “100 Years of the Sanford Stakes”