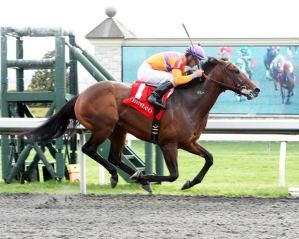 #1 Asserting Bear: One of the longer shots in the field has some ground to make up on a few of these who beat him when he was fourth in the GIII Spiral at Turfway Park last month and looks a bit out of his element here. Son of Bear’s Kid does own a Polytrack win, albeit over Ontario- breds at Woodbine last year, so at least you know he can handle the surface and Baker certainly does good work, but this seems like a mighty tall order; tough to endorse.

#2 Extrasexyhippzster: Somewhat surprising entrant tries Polytrack for the first time for Trombetta, who rarely ships and certainly doesn’t run them where they can’t compete, so you might want to take a second look here. Son of Stroll should handle the strip, as dad was a sharp turf runner some years back, but his two-turn debut in Aqueduct’s GIII Gotham last month wasn’t pretty, so he needs to wake up in a hurry. Tactical runner figures to trip out nicely and you have to respect this barn, but this is a big ask in his first start over a tricky surface; passing.

#3 Pablo Del Monte: Ward runner is perfect in two local starts and could be your inside speed today, as he stretches out off a pair of quick one-turn runs at Gulfstream Park behind Kentucky Derby-bound Wildcat Red and General a Rod. Son of Giant’s Causeway is bred for this trip and certainly gets some bonus points as a two-time local winner, but speed hasn’t held well early in the meet and the pace looks quick today, so let’s keep looking; siding against.

#4 Harry’s Holiday: Turfway Park invader goes for an always potent Maker barn after just missing when second by a nose in the GIII Spiral when last seen in an effort that gives him some price appeal in here. Son of Harlan’s Holiday has seemingly picked up his game since the switch to the Polytrack earlier this winter, but his running style is a concern, as he wants to mix it up early and we’ve already mentioned the pace looks pretty honest today. Still, it’s rare you get this barn at a good price over the local surface, so if you’re a fan, then there’s no reason you can’t string along; hardly impossible.

#5 Bobby’s Kitten: TepidML favorite has been his own worst enemy at times as he’s been very headstrong in all of his turf starts, and that assuredly won’t be a recipe for success if he pulls those antics again. Homebred son of Kitten’s Joy goes for the always dangerous Brown/Ramsey team and showed his class last year when third in the BC Juvenile Turf and looked good beating overmatched allowance rivals in his seasonal debut at Tampa Bay Downs last month. And while all that is fine and dandy, he’s also going to be vastly overbet, racing over a surface he’s never tried and encountering a tricky pace scenario that could get him way too amped up early, which will leave him wanting late; willing to make him prove it at false odds.

#6 Coltimus Prime: Lightly raced runner didn’t fire when 9th-of-10 in the GII Tampa Bay Derby in his seasonal bow in February but just missed in a Woodbine stakes over the Poly to end his 2-year-old campaign, so the surface switch makes sense today. Son of Milwaukee Brew is bred to run all day and should move forward in the second start of his year, but as an Ontario-bred and trained by Woodbine-based Nixon, you have to think the Queen’s Plate is the ultimate goal for this dude; overmatched.

#7 Casiguapo: GI-placed juvenile was a disappointing fifth in his lone start at 3, in a GP optional claimer, and seemingly gets thrown to the wolves today. Sightseeing colt has never tried the Polytrack and trainer Morales is a real unknown in these parts, so it’s almost like they are forging on because this colt ran well last year, not because he brought them here this year. Versatile sort showed talent as a 2-year-old but looks nothing like that runner so far in 2014; passing.

#8 Dance With Fate: California invader was a hard luck second in the GIII El Camino Real over the Tapeta at Golden Gate when last seen in February and brings some legitimate synthetic form to the party today. Eurton runner might be stretching his rubber band a bit thin, as he’s a son of Two Step Salsa, who isn’t really know as a route sire, but he did go 9Fs last time, so that does help ease the concerns. Of course, this is a much deeper group than he met in Northern California, but it’s nice to see Nakatani come in for the ride and there’s a nice stalking gear in this corner, which should play nicely in a race loaded with pace; won’t fault anyone looking this way.

#9 Big Bazinga: Fringe contender was given a longshot look in the Spiral but was a non-threatening fifth in an effort that seemed to hint that he’s more of a second tier type of 3-year-old, as opposed to a top threat. Closer may have been too close to the moderate pace at TP but should be further back today, which will undoubtedly help his chances. Son of Bluegrass Cat goes for a Vassilieva barn that is winless on the year, and thinking she gets on the board in this deep GI is a bit hard to fathom; using in the bottom rung of the exotics, if at all.

#10 So Lonesome: New York-bred marks a rare Kentucky appearance for Bush, who is off to a nice start to the season after struggling throughout much of 2013. Awesome Again gelding adds blinkers after running ninth in GP’s grassy GIII Palm Beach in March in his seasonal debut and needs to step up in a hurry if he wants to play with these. Stretch-runner has the right running style to be effective but has never beaten open company, which means he’s way up against it in his Polytrack debut; hard to like.

#11 Coastline: Improving Casse runner was third in the Spiral but part of the photo in a solid effort that got him back on the beam after disappointing in a pair of Oaklawn Park dirt stakes. Son of Speightstown is also a winner over the track, which gives him even more appeal, and he showed last time that he obviously loves the Polytrack, so it’s nice to know he’s finally back doing what he likes. And while dad was a sprint champion, the Spiral was also over 9Fs, which means he’s not out of his element today, and his stalking style makes him a major player since he can get first run on the closers off the turn; looms a real danger.

#12 Vinceremos: The first of three from Team Pletcher got run off his feet when second to Ring Weekend in the Tampa Bay Derby, but to his credit, he did fight on late to get a big piece, in an effort that flattered his win in their GIII Sam Davis in February. Son of Pioneerof The Nile has improved in every start, and while he makes his Polytrack debut today, it’s worth nothing Pletcher sent Palace Malice out to a second-place finish in this race last year, off a pair of dirt runs, so there’s a bit of a proven path in this corner. The draw isn’t ideal, but he should trip out nicely, and it’s rare you’re able to get this barn at a price, so you better take notice; contention runs deep.

#13 Medal Count: Beautifully bred son of Dynaformer wheels back on eight days’ rest after winning the local GIII Transylvania opening day, in a race that was washed onto the Polytrack, so you can’t blame Romans for striking while the iron is hot. Closer got a dream run last time but has always hinted that he’s full of talent, and anyone who saw his GP turf win to kick off his year had to be impressed. Owning a win over the track can’t be understated and his running style fits this race like a glove, which also helps negate his poor draw, so with the boss showing a ton of confidence and entering off such a quick turnaround, that’s good enough for us; call in a real scramble.

#14 Gala Award: Pletcher’s second runner is hardly without hope, as he enters off a game win in the Palm Beach, which was also his first start against winners, and that’s often a mighty tough feat to accomplish. Pricey $1.55 million yearling purchase is doing dad Bernardini proud and is certainly on the come, but this draw is brutal, especially since he wants to mix it up early, which means an extremely wide trip seems in the offing. On talent alone he fits nicely, but from way out here, with a less than ideal pace scenario, it’s tough to think he puts his best foot forward today; playing against.

#15 Divine Oath (AE): The lone runner on the also-eligible list will need a defection to get in for Pletcher but will bring a 2-for-2 record into the starting gate should he line up. Broken Vow colt has been under the radar all year but did nothing wrong in his two GP turf wins, while showing a nice closing kick in the process. The post won’t do him any favors if he gets to play but the price will be appealing and all the pace will flatter his style, so if he draws in, you could do worse than taking a stab here; intriguing, if he runs.