Yesterday The New York Times published a photo essay about Aqueduct, “Where Horses Race, but No One Wins.”

It was the typical Aqueduct article: the weather is terrible, the customers are losers, the place is a dump. Among the scenes pictured in the photos: a man asleep in a chair, a littered betting carrel, losing bettors. Apparently the photographer, Theo Zierock, didn’t take pictures of anyone who cashed tickets.

The accompanying text is, according to its author John Leland, not about the track itself but about the photographer’s “subjective experience of it.” To Zierock,  Aqueduct is “a decaying building populated by lonely old men” bereft of both “sanitation and security.”  So bad is the situation that the photographer said of the customers, “There’s a lot of serious psychological damage there…Not all of them should be free on the street.”

Aqueduct disdain is nothing new; built in 1894, the track was barely 10 years old when the Times noted that “in spite of the many improvements that have been made on the course since was racing begun there…[Aqueduct] makes slight appeal for fashionable patronage…the gathering was one that suggested more the hold that racing has on the speculatively inclined” (April 16, 1904).

Still, some racing fans were affronted at the depiction of the Big A, among them David Bruder, who took to Twitter to express his umbrage:

But the intrepid Bruder wasn’t content to leave it at that. He e-mailed the author, who responded promptly with an explanation of how the article came about: 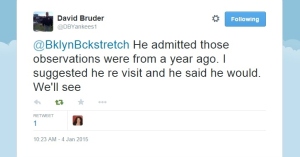 Leland confirmed in an e-mail to me that while he’s been to Aqueduct, he did not visit it for this story.  Zierock, the photographer, said that he visited Aqueduct more than 30 times between December 2013 and April 2014, which is when the pictures were taken.

On his website, Zierock takes a more affectionate stance than he does in the article. Calling Aqueduct “Americas [sic] roughest racetrack,” he notes a “strange balance of respect and competition” among the customers, observing that “the language, the signs, and the habits at Aqueduct are uniquely American, and worth preserving.”

As the Times story made the rounds yesterday, John Durso Jr, NYRA’s director of media and communications and an infrequent Twitter presence, posted this video and an October 2014 press release detailing $14 million in recent upgrades to Aqueduct.

4 thoughts on “About That Aqueduct Photo Essay…”